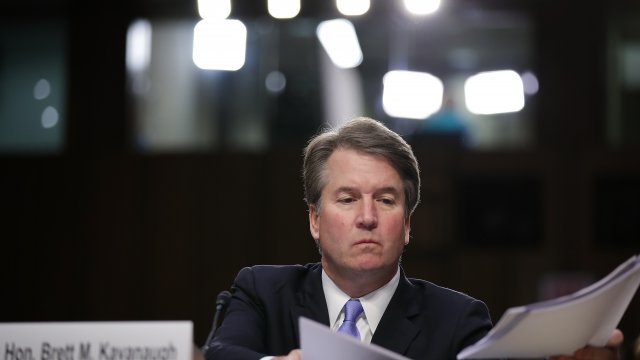 Three women — Christine Blasey Ford, Deborah Ramirez and, most recently, Julie Swetnick — have publicly accused the judge of sexual misconduct in separate instances dating back to the 1980s. To be clear, Swetnick did not accuse Kavanaugh of assaulting her personally.

A Senate Judiciary Committee hearing on Ford's accusations is set for Thursday, with an outside female sex crimes prosecutor handling questioning. In prepared testimony, Ford addresses how coming forward with her story has affected her life, noting: "It is not my responsibility to determine whether Mr. Kavanaugh deserves to sit on the Supreme Court. My responsibility is to tell the truth."

All the Democrats on the panel have called for President Trump to "immediately withdraw" Kavanaugh's nomination or ask the FBI to investigate the allegations.

At a press conference Wednesday, Trump didn't comment on that ask, but he did comment on Kavanaugh.

"This is one of the highest quality people that I've ever met. And everybody that knows him says the same thing," he said. "And these are all false to me. These are false accusations in certain cases, and [in] certain cases even the media agrees with that. I can only say that what they have done to this man is incredible."

Senate Judiciary chair Chuck Grassley, a Republican, said while investigators are looking into the latest claim against Kavanaugh, the hearings won't be pushed back.

In written testimony and a Fox News interview, Kavanaugh denied the allegations and said he's never sexually assaulted anyone. He responded to Swetnick's claims Wednesday, saying they were "from the Twilight Zone" and that he doesn't know who she is.

The panel is expected to vote on his nomination Friday. A full Senate floor vote could happen as early as next week.