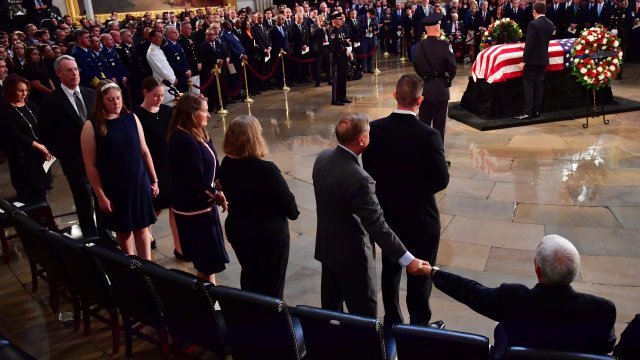 "John McCain deserves to be remembered as he wished to be remembered: a patriot who served his country, a man who made an enormous difference in the lives of countless people," Speaker Paul Ryan said.

Lawmakers gathered at the U.S. Capitol Friday to pay their respects to John McCain.

"He treated every issue with the intensity the people's business deserved. He would fight tooth and nail for his vision of the common good. Depending on the issue, you knew John would either be your staunchest ally or your most stubborn opponent," Sen. Mitch McConnell said.

The late senator was given the honor of lying in state in the Capitol rotunda. McCain's family, including his 106-year-old mother, also attended Friday's service.

A funeral is scheduled for Saturday in Washington D.C. before McCain is laid to rest at the U.S. Naval Academy on Sunday.