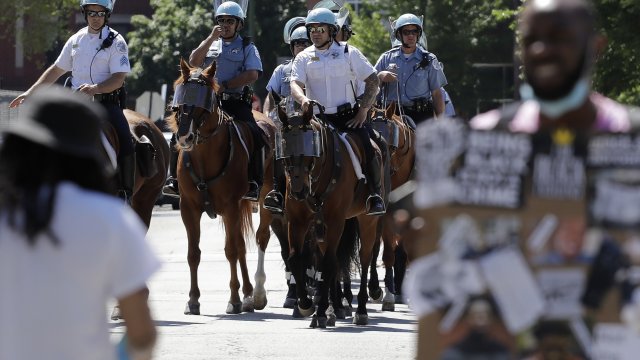 The ongoing protests following the death of George Floyd have spotlighted the need for police reform — and lawmakers are listening.

In Congress, Democrats introduced a bill that includes the creation of a national registry of police misconduct, where discipline and termination records will be made available to the public in an effort to hold officers accountable.

In New York, lawmakers voted to repeal 50-A, a law that keeps police disciplinary records a secret. And Gov. Andrew Cuomo is saying he'll sign it into law.

Gov. Andrew Cuomo: "We haven't done anything, and now it's time to act."

But while the NYC Police Union president thinks the actions of former Minneapolis officer Derek Chauvin were "disgusting," he disagrees with the repeal.

Patrick Lynch, president of PBA of New York City: "No one's read the bills. They're following the crowd. ... They're legislating by signs in a protest."

The union president says it will put officers at risk and increase false accusations: "Newly released records will be combined to further the false anti-cop narrative."

Currently, in some states police disciplinary records aren't public, not even between departments. That means if an officer has a history of misconduct in one state, they can get hired in another state without the hiring department knowing the officer's offense.

A 2015 project by New York public radio WNYC found 23 states and Washington, D.C., do not publicly release disciplinary records. And a Washington Post 2017 investigation found a large percentage of officers fired for misconduct were rehired due to union contract appeals. Forty-five percent of D.C. officers who were fired for misconduct were rehired. In Philly, 62%; in San Antonio, Texas, 70%.

This bold move in New York might push other states to consider more transparency.

Retired Deputy Corey Pegues, New York City Police Department, said, "This is good because you can start seeing which cops are good, which cops are bad."

But it's not perfect, says retired this New York City deputy.

Pegues: "There will also be agitators who don't like police who will start inundating police officers with complaints."

And while this repeal may seem like a sudden move, it's been a long time coming.

WTVR: Black Police Officer Shares Her Perspective On The Protests

The Richmond, Virginia police officer says she identifies with both sides of the protest line.

Retired Chief Brendan Cox, National Police Foundation: "I know everybody feels like this stuff is coming a mile a minute, but in reality, you know, many of these reforms are being pushed for a number of years. They've just never gotten where they were supposed to get."

That's retired Albany Police Chief and former union rep Brendan Cox. He has been pushing for the repeal of New York's 50-A for years.

Cox: "I've learned my lesson. And I've learned that we can do our jobs. We can do it by being transparent and we can build much better relationships with our community and make our officers safer by actually having transparency and accountability."

While the spotlight has been on police unions, experts I spoke to say accountability needs to be shared from judges, district attorneys, legislative bodies who create the laws in the first place and cities who with police unions negotiate their contracts.