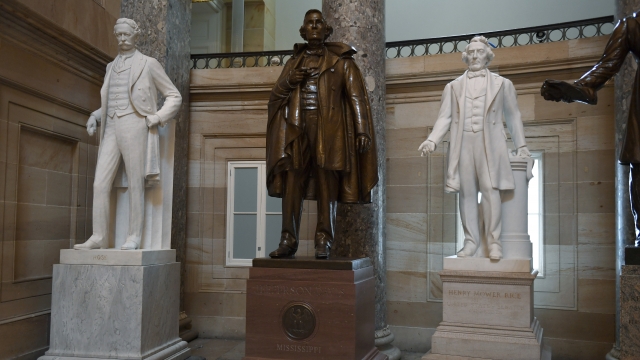 For the second straight year, House Democrats are pushing to remove confederate statues in the U.S. Capitol, along with the bust of Former Supreme Court Chief Justice Roger Taney, who infamously wrote the 1857 ‘Dred Scott’ decision upholding slavery in the United States.

Most of the statues are still standing after the Republican-controlled Senate blocked the measure last year.

Then-Majority Leader Mitch McConnell, (R-KY), said the move would be a “bridge too far” and an attempt to “airbrush” history.

The bill would return any statues of Confederates to their respective states, and allow the state to replace them, provided the replacement didn't serve in the Confederate States of America.

Ten confederate statues remain in the Capitol, one was removed last year, when Virginia’s Democratic Governor arranged for a statue of confederate General Robert E. Lee to be removed in the middle of the night in December, with plans to replace him with a statue of Barbara Rose Johns, a key figure in the Civil Rights Movement.

Currently, it's up to states to remove their statues, but Democrats hope to change the laws, forcing removal of statues of those who fought against the United States.

For a second year in a row, that responsibility will ultimately fall on the U.S. Senate.