With Primaries Around The Corner, New Names May Crowd Democratic Field 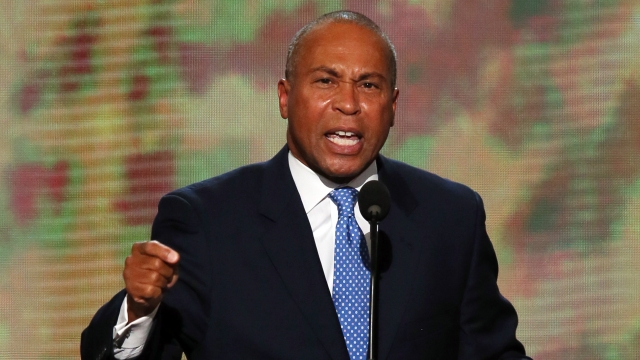 SMS
With Primaries Around The Corner, New Names May Crowd Democratic Field
By Peter Hecht
By Peter Hecht
November 14, 2019
Deval Patrick is a late entry in the race, Michael Bloomberg is inching in and Hillary Clinton is sounding wistful. What does it mean for Democrats?
SHOW TRANSCRIPT

"You better believe we can!"

Now, the former two term-governor, is looking to make history again by formally announcing his run for the White House, a late entry in the Democratic primary after nine other candidates have already dropped out.

This guy, Michael Bloomberg, the billionaire former three-term New York mayor, may be next.

"Well good morning everyone. Can't hear you. Good morning! That's the spirit. Mayors are supposed to be out there and not afraid to say something.”

And then, there is speculation about a very well-known politician.

“Hi everyone, I’m here to let you know that there’s still time for join me in New York for a Broadway show and a glass of Chardonnay.”

Perhaps Hillary Clinton, the Democratic nominee in 2016, is just tipping her glass for a little attention. While Patrick is officially in the race and Bloomberg has taken out campaign filing papers in two states, Clinton hasn't made any concrete steps toward running.

But she just told the BBC in an interview that she will "never say never," adding: "I think all the time about what kind of president I would have been...I think about it all the time."

Critics see the more-centrist Biden as vulnerable. And they feel Warren, along with Bernie Sanders, may be pulling the party too far left and scaring off moderates.

Patrick drew national recognition for leading the response to the 2013 terrorist bombings at the Boston Marathon.

Political observers say his favorable name i.d. could compete with Warren in the New Hampshire primary and challenge Biden among African-American voters in South Carolina. Patrick suggests he has the profile to beat Donald Trump.

Patrick lacks money and campaign infrastructure, but cash is no issue for Bloomberg.

The Wall Street and media mogul is worth north of $50 billion and he has maintained a national and international profile, including at this recent international forum on climate change.

“A decade ago all the talk about climate change was focused on presidents and parliaments, and mayors were outside the tent looking in. Over time, we forced our way into the tent, especially at the Paris climate summit in 2015. And now I think it’s fair to say, we are the tent and, today, national and international leaders recognize the importance of empowering mayors who are eager to lead.”

Bloomberg may be eager to lead, as is Patrick and perhaps Clinton, once again. But Democratic strategist Jamal Simmons suggests their ships may be setting sail far too late to reach the presidency - because "it's really hard to build this boat on the water."