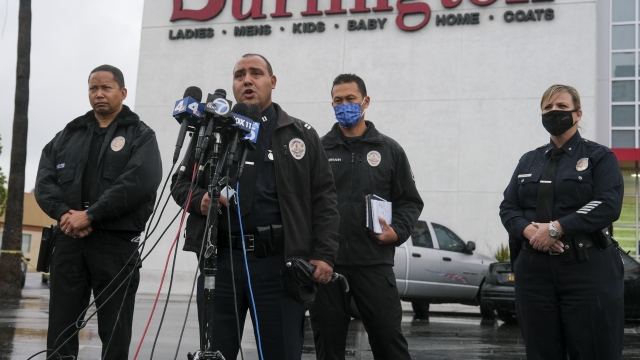 Video released Monday showed Los Angeles police firing at a man suspected of assaulting customers last week at a clothing store, a shooting that also killed a 14-year-old girl hiding in a dressing room who was struck by a bullet that went through a wall.

Surveillance video showed the suspect attacking two women, including one who fell to the floor before he dragged her by her feet through the store's aisles as she tried to crawl away.

Multiple people including store employees called police to report a man striking customers with a bike lock at the store in the North Hollywood area of the San Fernando Valley. One caller told a 911 dispatcher that the man had a gun. No firearm — only the bike lock — was recovered at the scene.

The early surveillance footage showed a man in a tank top and shorts carrying a bicycle up the store's escalator to the second floor, where he wandered around, seemingly disoriented, clutching a cable-style bike lock. At times he stood motionless, staring into the distance.

The footage later showed the man on the down escalator attacking a woman, who managed to escape his grip and run out of the store.

The man then left the store for a minute and a half, police said. After he returned, according to the video, he repeatedly beat a woman with a bike lock while she cowered on the floor. As she tried to escape, he dragged her through the aisle toward the dressing rooms.

In bodycam video, armed officers entered the store and approached the suspect. The victim was seen on the blood-stained floor and the suspect was on the other side of the aisle. At least one officer opened fire, striking the man.

The 24-year-old suspect, Daniel Elena Lopez, died at the scene. Also killed was Valentina Orellana-Peralta, 14, who was hiding with her mother inside a dressing room.

The girl's parents will appear with civil rights attorney Ben Crump at a news conference outside Los Angeles police headquarters on Tuesday.

Mourners left flowers and a votive candle outside the store on Christmas in a memorial for Orellana-Peralta.

The Times reported that Elena Lopez's previous criminal history includes convictions for car theft, carrying a loaded gun in public and carrying a gun as a felon. He was transferred to the Los Angeles County jail to the custody of the state prison system but a spokeswoman for the corrections department would not release his commitment history to the newspaper because of the LAPD investigation.