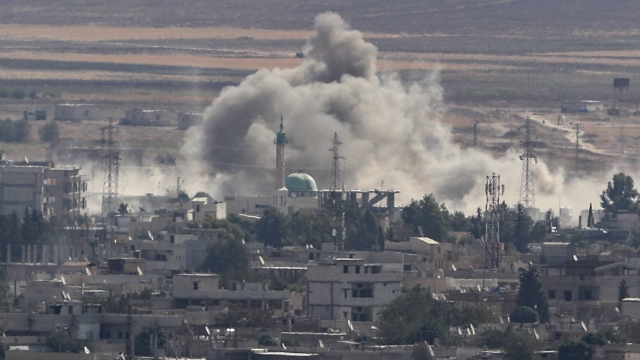 The Kurdish population in Syria is used to burying the casualties of war. After all, Kurdish troops lost 11,000 fighters in leading the military campaign on ISIS on behalf of the U.S.

This once critical ally is burying its dead again after Turkey's military attack in Syria that began Oct. 9. What the Kurds aren't burying is their skepticism. Notably, they aren't assured by a promised 120-hour pause in fighting under an American deal with Turkey that President Trump called "a great day for civilization."

But U.S. concessions to Turkey for a cease fire include unilateral withdrawal and ceding of territory 20 miles in from the Turkish border. It includes major Kurdish population centers.

Kurdish political leader Saleh Muslim says that's no deal at all for the Kurds. He told local television: "Ceasefire is one thing and surrender is another thing, and we are ready to defend ourselves. We will not accept the occupation of northern Syria.”

The Turks regard the Kurdish Syrian Democratic Forces as a terrorist group and a threat. Multiple media reports and international organizations say fighting was continuing on Friday.

An SDF spokesman said Kurdish areas remained under attack, saying: "Despite the agreement to halt the fighting, air and artillery attacks continue to target the positions of fighters (and) civilian settlements," including a hospital.

Turkey denied the claim, saying: "Terrorist organizations have been attempting to deceive the whole world."

What is indisputable is that the Kurds feel abandoned by the U.S. And a new ally is rolling into the area: Syrian troops loyal to President Bashar al-Assad. The Syrian government said its forces would fight the "Turkish aggression," threatening more chaos and bloodshed.