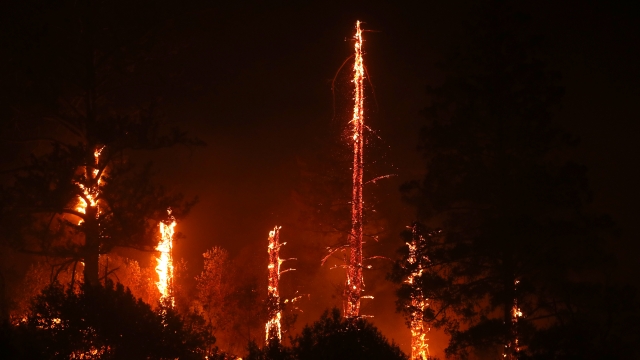 Cal Fire reports the Kincade Fire ignited Wednesday night and has scorched more than 10,000 acres. This time-lapse video appears to show the moment the Kincade Fire started. As of Thursday morning, it's 0% contained.

Around 1,700 residents are affected by the evacuation order, with more orders expected to be announced. Some residents drove through thick smoke to evacuate.

Fire officials say the cause of the blaze is under investigation. Pacific Gas & Electric Co. cut power to more customers Wednesday as a precautionary measure to prevent its equipment from starting any fires. The utility company said this round of shut-offs will affect around 179,000 customers in parts of 17 counties, including Napa and Sonoma.

Another fire broke out early Thursday morning north of San Bernardino. The Old Water Fire has burned 75 acres and is 0% contained. About 80 homes are under an evacuation order.