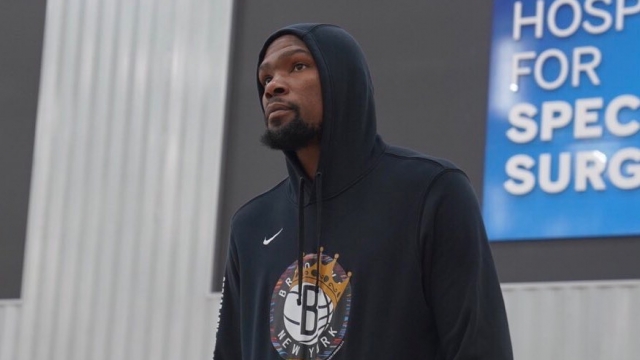 SMS
Kevin Durant Among 4 Nets Players To Test Positive For Coronavirus
By Ahmed Jawadi
By Ahmed Jawadi
March 17, 2020
The Nets didn't name the affected players, but Durant confirmed his diagnosis to The Athletic.
SHOW TRANSCRIPT

NBA star Kevin Durant is the latest player to test positive for the coronavirus.

The Brooklyn Nets announced in a press release Tuesday that four team members had tested positive for the coronavirus and that one of them had been symptomatic. Although the team didn't name the players, Durant told The Athletic he's one of them, saying: "Everyone be careful, take care of yourself and quarantine. We're going to get through this."

The Nets said all four players are currently in isolation and that the team is "notifying anyone who has had known contact with the players, including recent opponents." It's also asked players and members of the team's travel party to isolate themselves and "closely monitor their health."