Here's The Artist Who's Documenting Doctor Strikes With Paint

SMS
Here's The Artist Who's Documenting Doctor Strikes With Paint
By Melissa Prax
By Melissa Prax
February 6, 2017
Many doctors in Kenya haven't gone to work for more than two months.
SHOW TRANSCRIPT

There are few — if any — doctors working in Kenya because of a recent strike. So artist Joseph Mbatia is using paint to show the consequences of a country without physicians.

Doctors say they're on strike because of little pay and the poor conditions they have to work in — issues that were supposed to already be addressed by the government.

"Art is a very powerful tool. I'm taking it as a tool to facilitate to the ongoing strikes so that people can know their positions," Mbatia said. 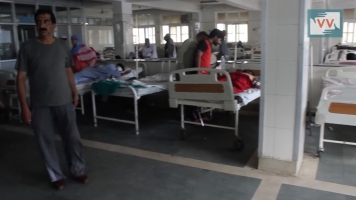 Does Violence In Kashmir Mean A Medicine Shortage?

Some residents blame the strike for causing their family members to die.

Human rights groups have called for the government to resolve the strike, which has lasted over two months and affected millions of people.

This isn't Kenya's first doctors' strike. It's not Mbatia's, either. He illustrated one in 2014 before it happened.