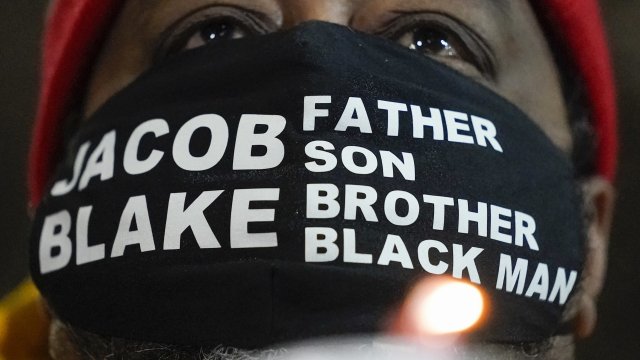 Kenosha County's district attorney called it "incontrovertible" that Blake was holding a knife and made a motion toward the officer who shot him.

The Kenosha, Wisconsin, officer who shot Jacob Blake several times in the back will not face criminal charges.

"It is my decision now that no Kenosha officer in this case will be charged with any criminal offense, based on the facts and the laws," Kenosha County District Attorney Michael Graveley said.

"Everybody has seen the video. They tried the case in their living room. As a professional, I am called upon to talk about how to try this case in a real jury room," Graveley added.

Among other things, Graveley said it is "incontrovertible" that Blake was holding a knife during the incident and that multiple witnesses confirmed Blake made a motion toward officer Rusten Sheskey before Sheskey opened fire.

Blake's family attorney, Ben Crump, says the decision "failed not only Jacob and his family but the community that protested and demanded justice."

Jacob Blake was shot by Kenosha police officer Rusten Sheskey in August when Kenosha PD responded to a domestic incident. Blake was shot seven times in the back while walking away from officers who were attempting to arrest him.

Blake's children were in the back seat of the SUV he was heading toward when he was shot. Blake survived the incident but is paralyzed from the waist down.

Video of the incident went viral in the days following the shooting and led to widespread, sustained protests in the Kenosha community and beyond. Some of the protests in Kenosha turned violent, with businesses being burned down and one member of a militia group shooting and killing two people.

There is still an ongoing federal civil rights investigation into the shooting by the Department of Justice.