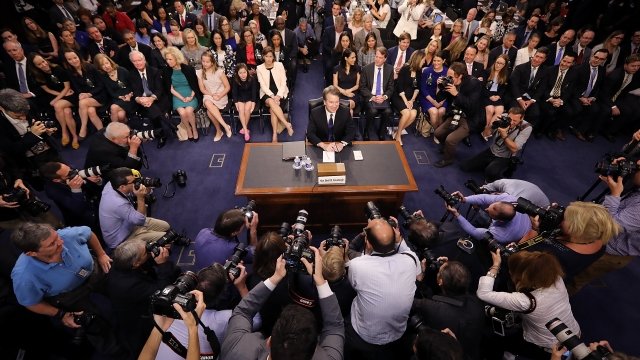 A redacted transcript of that call was released Wednesday night by the panel.

The first claim was reportedly made in an anonymous letter sent to Sen. Cory Gardner. The author wrote that their daughter witnessed Kavanaugh physically assault a woman he was on a date with in 1998.

According to the transcript, Kavanaugh responded by saying: "We're dealing with an anonymous letter about an anonymous person and an anonymous friend. It's ridiculous. Total twilight zone. And no, I've never done anything like that."

Kavanaugh also pushed back against an allegation made by a Rhode Island man "concerning a rape on a boat in August of 1985."

These two allegations are on top of the ones made publicly by Christine Blasey Ford, Deborah Ramirez and Julie Swetnick. Those three women accuse Kavanaugh of sexual misconduct when he was either in high school or college — though Swetnick did not accuse him of assaulting her personally.

A Senate Judiciary Committee hearing on Ford's accusations is set for Thursday, with an outside prosecutor handling questioning.