Kate Middleton Played Cricket, And The Dress She Wore Sold Out 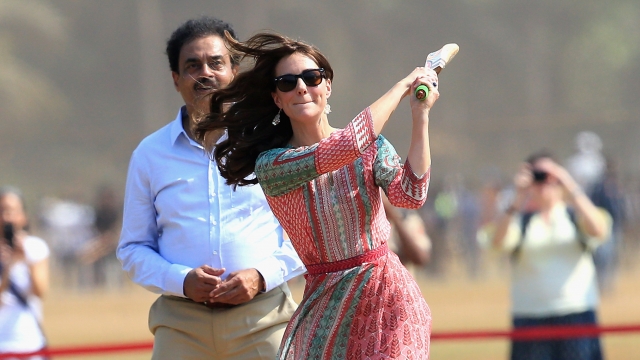 SMS
Kate Middleton Played Cricket, And The Dress She Wore Sold Out
By Katherine Biek
By Katherine Biek
April 13, 2016
The Duchess of Cambridge wore a dress in India, and it sold out in a few hours — like quite a few of her other outfits.
SHOW TRANSCRIPT

No surprise here — the Duchess of Cambridge wore a pink and teal dress to play cricket in India. And within hours, the designer's website crashed because so many people tried to order it.

It's a phenomena known as "The Kate Effect."

Middleton will be seen in one of her many ensembles, and hours later, it'll sell out.

But there seems to be a fascination with Middleton's wardrobe that exceeds all other celebrities — so much so, the purchases might've added over $1.4 billion to the U.K. fashion industry.

And it's not just her wardrobe. In 2011, a spokesperson for a U.K. jewelry company told Vogue that sales of sapphire and diamond rings — similar to the engagement ring Prince William gave Middleton — had increased 30 percent since the couple made the announcement.

As for the most recent example of "The Kate Effect"? The Indian designer told The Wall Street Journal her company is increasing production of the dress by 500 percent to meet the growing demand.