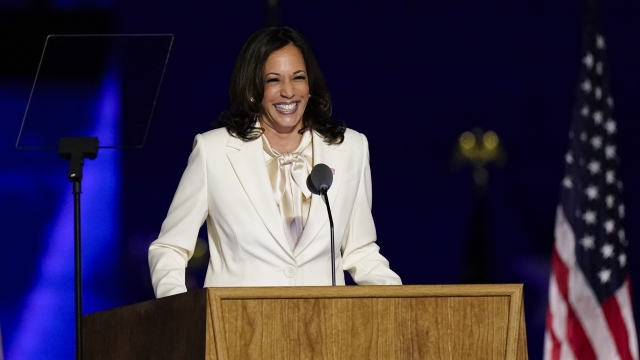 Kamala Harris has made history as America's first woman and first person of color elected as vice president.

Harris, who is Black and South Asian, is reaching the milestone in an election year marked by a global pandemic and widespread protests against racial inequality.

"Regardless of where we live, our race, our gender, the language our grandmother speaks, that we all have so much more in common than what separates us," Harris said last month at a rally in Miami.

Harris has a long track record of breaking barriers. She was the first woman of color to serve as California's attorney general and became only the second Black woman elected to the Senate in 2016.

"Black women are too often overlooked but so often prove they are the backbone of our democracy," Harris said Saturday night in her victory speech.

She quickly made a name for herself on Capitol Hill, asking tough questions during high-profile Senate hearings that at times went viral online.

The daughter of Indian and Jamaican immigrants, Harris spoke often on the campaign trail against discrimination and inequality.

"Justice. Let's talk about that. Because the reality is that the life of a Black person in America has never been treated as fully human — and we have yet to fulfill that promise of equal justice under law," Harris said during a speech in August.

And paid homage to the trailblazers who she said paved the way for her.

"Tonight is a testament to the dedication of generations before me. Women and men who believed so fiercely in the promise of equality, liberty and justice for all," she told supporters Saturday night in Wilmington, Delaware.