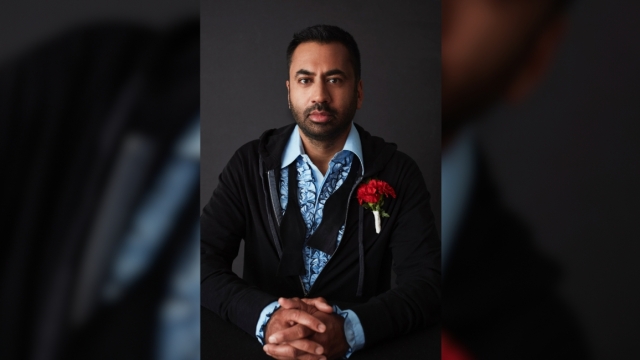 NEWSY'S CHANCE SEALES: So, you met your soon-to-be husband, Josh, in a D.C. bar. You had this nice, low-key bar, low-key guy – Mississippi accent – you fall in love over beer and koozies –— he brought one for you on date No. 2, which kinda sealed the deal. How does it feel to fling the door open after 11 years together and actually tell the world about it?

KAL PENN: The bar that you mentioned — I wish it was still there — it's called Townhouse Tavern, between DuPont and Logan. It was a townhouse. The bottom two levels were a dive bar, and I think, if I remember correctly, in order to get to the apartments upstairs, you had to walk through the bar, so there were people who actually lived upstairs who, everyday, you'd see them coming home from work — it was just one of those super-quirky D.C. places that I wish still existed. But yeah, like you said, we met for a drink and then our second date was supposed to be: 'Just come over Sunday afternoon.' I was a White House aide at the time, so Sundays are kinda your only day that you can really stay home and either work from home or take time off, do your laundry, all that. So he rolls up with an 18-pack of Coors Light and I had Spongebob Sqaurepants on the TV because I'm a romantic. And he changes the channel, puts on the NASCAR race and then puts the rest of the beers in the fridge. I was like 'Did this just happen, unironically?' I grew up outside of New York City — we don't really watch NASCAR — and this guy from Mississippi rolls into my apartment, touches my TV and puts it on NASCAR so I was immediately was like, 'Well, obviously, this isn't gonna work out. He brought 18 beers and there's gonna be 16 left that he can take with him.' And we just started having a really great conversation. ... I do talk about this in the book — there was what I thought was a massive explosion in which one of the drivers had obviously been seriously injured and he just sort of walks off, dusts himself off, and I was like 'Oh, OK, that was actually pretty cool that that just kind of happens.' But the real reason that we bonded was over the idea that, you know, my parents are immigrants. We didn't grow up with a lot of money. We grew up outside of New York City in the suburbs. One of the family vacations we would do is camping because camping is essentially free, you know, we'd pack a tent, pack up the station wagon and go all over the northeast. And Josh kind of grew up in a similar sense. He grew up in rural Mississippi, but their camping trips would be to NASCAR races where they would camp out, watch these cars go around the track. For people to be two totally different humans, like Josh and I are — the fact that you can bond off of that shared experience of what it means to be with family through something like camping was actually kind of like an unexpected icebreaker for us to get to know each other. Like you mentioned, we've been together for 11 years. You know, we've actually been engaged for about two years. I know that it seems like it's new because obviously we talk about how we met and the whole NASCAR story in the book, which I'm very excited for people to read. But, he's a really quiet guy, you know, similar to my parents — who I'm so thankful that they're supportive of my career — but whenever they — and Josh is in the same boat here — whenever they've come to my movie premieres or whenever we do anything work-related, we get out of the car and I've got to do all of the press and talk to people about the movie, and they're like, 'We're gonna grab popcorn and slip through the side and see you inside at the seats. We don't want any of that.' So part of the reason that I didn't share, early on, is out of respect to Josh and, of course, a lot of the stories about my parents in the book also, out of respect to them. But then I said, 'You know, the purpose of writing this book is for the 20-year-old me. You know, the kid who never really had a guide book on how to become an actor as a man of color.' And then the crazy things that I think, whether you're 20 or not, that many of us feel, especially coming out of a pandemic, 'Am I satisfied with my job?' 'What's the crazy thing that I want to do with my life that everyone's told me I shouldn't do?' That if you look at the job market, ... so many people right now are saying, 'Do I wanna shake my job up?' 'Do I wanna do that thing I've always been passionate about?' So, this book is also for them, and I'm really happy that all of these stories are coming together in a way that, it sounds like you enjoyed, which makes me happy.

You can watch the full interview at 8 p.m. ET Friday on Newsy Tonight.