What Exactly Are The Free Speech Rights Of NFL Players? 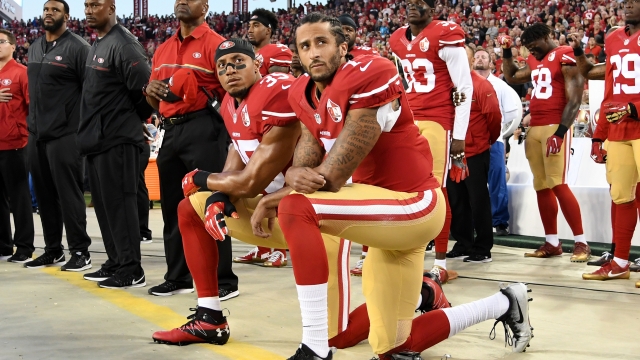 SMS
What Exactly Are The Free Speech Rights Of NFL Players?
By Carter Woodiel
By Carter Woodiel
September 18, 2016
With more and more players speaking out recently, it's important to know players' boundaries — and how the First Amendment doesn't really apply here.
SHOW TRANSCRIPT

More and more NFL players are following Colin Kaepernick's lead and taking a knee during the national anthem to protest police brutality and racial oppression. Critics say they don't have the right to do it.

As it turns out, the free speech rights of NFL players are pretty complicated and have more to do with the NFL rulebook than the First Amendment.

SEE MORE: Newsy's Audience Has A Lot To Say About Athlete Protests

Let's look at one critic of the protests, Jeffery Bell, who heads a Miami police union. He says his workers shouldn't work Dolphins games anymore after four of their players kneeled during the national anthem at their season opener.

Bell told the Miami Herald: "I respect their right to have freedom of speech. However, in certain organizations and certain jobs you give up that right of your freedom of speech ... while you serve that job or while you play in an NFL game."

Bell has a point here; the First Amendment protects free speech, but only against government prosecution — it doesn't keep your employer from making rules about what you can or can't say.

But that's not the case with the NFL and standing for the national anthem. The league doesn't have any rules that say you have to stand for the song, and there's nothing in the collective bargaining agreement about it either.

This is a little surprising, since the NFL is notoriously restrictive on how its players act during a game.

Things like choreographed celebrations, taunting and uniform alterations are all against the rules, and pleading the First Amendment won't stop a player from being penalized or suspended.

So sports leagues like the NFL clearly have a lot of power here, and it's not like they can't have a rule that says players need to stand for The Star-Spangled Banner.

The NBA, for example, has a black-and-white rule that mandates players stand for the national anthem. And it's been enforced before.

In 1996, point guard Mahmoud Abdul-Rauf refused to stand for the national anthem, saying doing so would conflict with his faith. The NBA suspended him for one game before allowing him to look down and pray during the anthem.

So NFL players will have to deal with the restrictions their league enforces — but standing for the anthem, for now, isn't one of them.