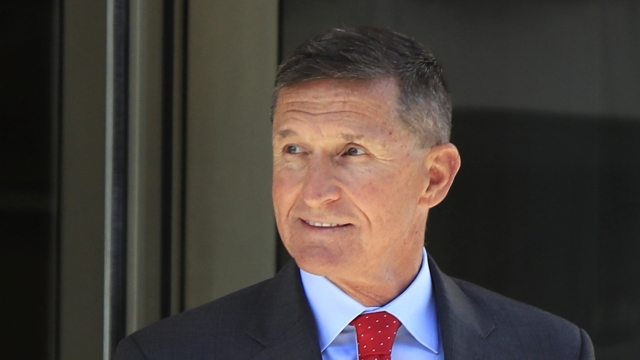 SMS
Justice Department Drops Criminal Case Against Michael Flynn
By Katie Cammarata
By Katie Cammarata
May 7, 2020
Flynn pleaded guilty in 2017 to lying to the FBI amid Robert Mueller's Russia probe, but he recently asked to withdraw that plea.
SHOW TRANSCRIPT

The Justice Department is dropping the criminal case against former national security adviser Michael Flynn. The department filed a motion to dismiss the case Thursday.

Flynn pleaded guilty in 2017 to lying to the FBI amid special counsel Robert Mueller's Russia probe about conversations he had with a Russian ambassador. But in January of this year, Flynn's lawyers asked a judge to withdraw his guilty plea, and Attorney General William Barr called for a full review of the case in February.

A DOJ filing says after an "extensive review and careful consideration of the circumstances", it decided "continued prosecution of this case would not serve the interests of justice." The department says Flynn's interview with the FBI in January 2017 was "untethered to, and unjustified by, the FBI's counterintelligence investigation into" him and may not have been conducted with a "legitimate investigative basis." It also said the government doesn't believe Flynn's statements to the FBI were relevant even if they were untrue, and that it cannot prove "either the relevant false statements or their materiality beyond a reasonable doubt."

President Donald Trump has long called for Flynn's exoneration. He even said in March he was considering a full pardon for Flynn.