EU Says — Again — That Brexit Deal Is Not Up For Renegotiation 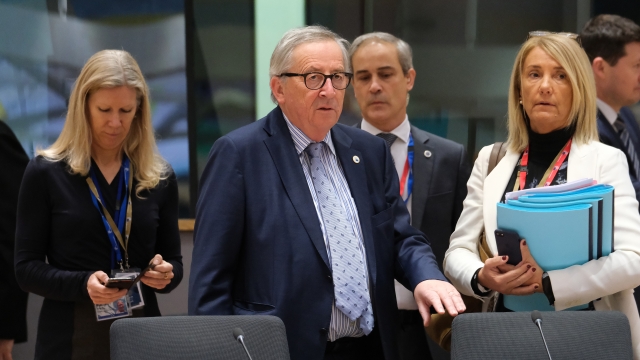 SMS
EU Says — Again — That Brexit Deal Is Not Up For Renegotiation
By Ahmed Jawadi
By Ahmed Jawadi
May 28, 2019
Parliament has rejected the deal three times, but the EU Commission's president says the EU isn't coming back to the table.
SHOW TRANSCRIPT

European Commission President Jean-Claude Juncker says the EU will not renegotiate the U.K.'s Brexit deal, despite the country's Parliament having rejected it three times so far.

Speaking ahead of a meeting of EU leaders on Tuesday, Juncker didn't mince words when asked about the possibility of any further talks on the agreement.

"I will have a short meeting with Theresa May, but I was crystal clear: There will be no renegotiation," Juncker said.

Juncker's comments were unsurprising, given that EU leaders have repeatedly said the current deal is the only one they'll accept. Last week, he expressed his frustration with the parliamentary stalemate over the withdrawal agreement. He said he wants to see the Brexit process finally come to an end, but that he wouldn't be surprised if another delay was on the horizon.

Juncker's comment also comes on the heels of British Prime Minister Theresa May's announcement that she would step down following backlash over her "new" Brexit plan.

Now that EU Parliament elections have wrapped up, EU leaders are currently discussing who will become the next Commission president once Juncker retires on Oct. 31.