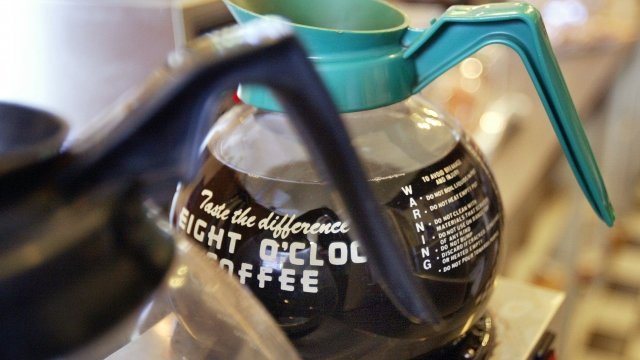 SMS
Judge Rules Calif. Coffee Companies Must Warn About Cancer Risks
By Katherine Biek
By Katherine Biek
March 30, 2018
A state law requires businesses to notify their customers about chemicals in their products that could cause cancer.
SHOW TRANSCRIPT

A California judge ruled coffee sellers in the state must warn their customers that their coffee products carry a cancer risk.

The judge sided with a nonprofit group, which first filed a lawsuit against Starbucks and other coffee companies in 2010 for violating state law. That law — Proposition 65 — requires businesses to notify customers about chemicals in their products that could cause cancer. The warnings are prevalent throughout the state and are already found on homes, workplaces, products and even parking lots.

One of those chemicals is acrylamide, which is produced when cooking some food at a very high temperature. It's also formed when coffee beans are roasted.

The judge said in a decision Wednesday that coffee companies had failed to prove the carcinogen is harmless when produced during coffee roasting.

More than a dozen of the defendants, including 7-Eleven, settled prior to the Wednesday decision and agreed to post warnings.