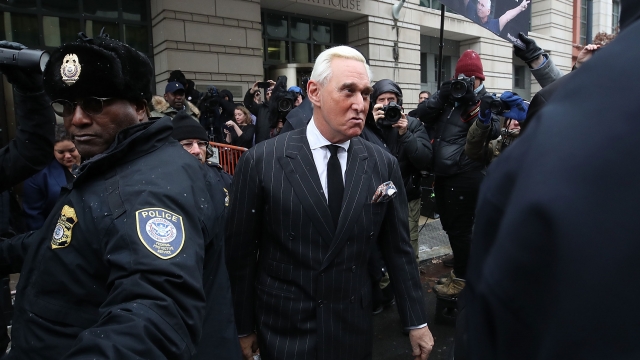 The judge in Roger Stone's criminal trial has warned the former Trump campaign adviser that a re-release of one of his books could violate her recent gag order.

Stone was banned from making any public comments about his case after his Instagram account posted a photo on Feb. 18 of U.S. District Judge Amy Berman Jackson with what appeared to be crosshairs in the background. That same week, Stone's 2017 book about the presidential election was re-published with an "explosive new introduction."

In the new introduction he says, "I now find myself on Crooked Special Prosecutor Robert Mueller's hit list because I've advised Donald Trump for the past 40 years. I am being targeted not because I committed a crime, but because the Deep State liberals want to silence me and pressure me to testify against my good friend."

Stone's attorneys asked Jackson to clarify whether the release of book violates the gag order. The judge rejected that request Tuesday, saying "there is no question that the order prohibited and continues to prohibit the defendant from making any public statements, using any medium, concerning the investigation."

She also wants to know why Stone's attorneys didn't disclose the planned book release to the court sooner. She says Stone "deliberately waited until public sales were not only 'imminent,' but apparently, ongoing, to inform the court of the publication effort that had been underway for weeks."

Stone and his attorneys must now provide a report of his specific actions taken to comply with the judge's gag order by Monday. According to NBC News, if Jackson determines Stone violated the order, she could extend it so he cannot make any public statements on any topic or require him to stay in jail until his trial.