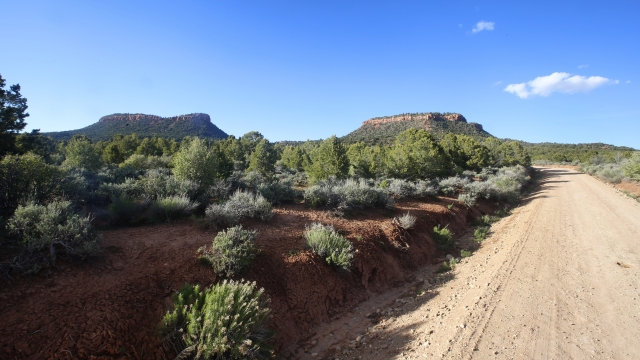 Environmental groups have challenged the Trump administration's effort to reduce the size of Utah's Bears Ears National Monument. On Monday, a federal judge dismissed the administration's argument that the lawsuit should be thrown out.

The Navajo Nation and four other Native American tribes are also defending the national monument.

In 2017, the Trump administration moved to reduce the 1.9 million-acre Grand Staircase-Escalante National Monument by about half. It also reduced the size of Bears Ears by nearly 85%. In July, the administration proposed to use the remaining 15% of land for roads and utility lines.

But an official at Earthjustice, a nonprofit environmental law organization, says those moves were illegal. A lawsuit filed by Earthjustice and other environmental groups alleges the president did not have authority to open the land for development because of laws protecting national monuments. President Barack Obama designated Bears Ears a monument in 2016, and President Bill Clinton designated Grand Staircase in 1996.

The official told The Hill: "When Trump went after our national monuments, he thought he could ride roughshod over this country's cultural and natural heritage, and auction off iconic public lands that belong to all of us. But this remains a country of laws. We will work relentlessly until we ensure that Bears Ears and Grand Staircase are protected forever as they were meant to be.”

Earthjustice has also sued over the Trump administration's move to exempt Alaska's Tongass National Forest from certain logging restrictions. A judge put the planned sale of more than 40,000 acres on hold in September.

The judge in the Bears Ears case ordered lawyers from both sides to attend an Oct. 7 hearing on "an expedited, coordinated schedule" for additional brief filings. That means the legal action brought by both groups will continue.