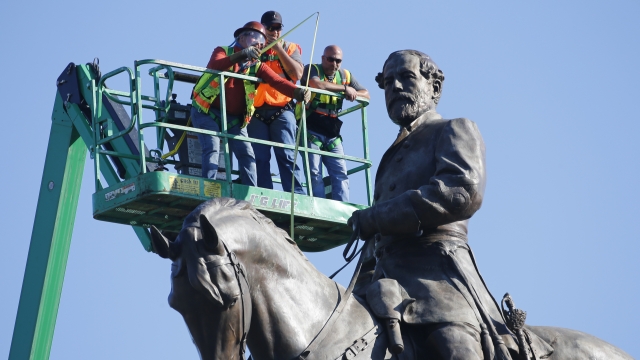 A judge in Virginia extended an injunction Thursday that bars the state from removing a statue of Confederate Gen. Robert E. Lee.

Earlier this month, Gov. Ralph Northam said the statue would be removed and put into storage while the government works with the community to determine what to do with it. He made the announcement after days of unrest in Richmond over the death of George Floyd. But because of a series of lawsuits, that plan has been put on hold.

William Gregory filed a lawsuit against its removal. He says he's a descendant of the statue's donors, and that the terms of a deed from 1890 obligate the state to protect the statue. The judge reportedly said the monument "is the property of the people" and gave Gregory 21 days to file a new complaint.

State Attorney General Mark Herring said: "It's in the public interest for the Lee statue to come down. It's a reminder of a past that should not be celebrated. Each day it stands cuts a deeper wound into the hearts and minds of those who have endured the pain of systemic racism and injustice for far too long."

The statue, now covered in graffiti, sits on Monument Avenue along with several other Confederate monuments. Protesters in Richmond recently pulled down a statue of Confederate President Jefferson Davis in the same area.

Additional reporting by Sarah Rankin of the Associated Press