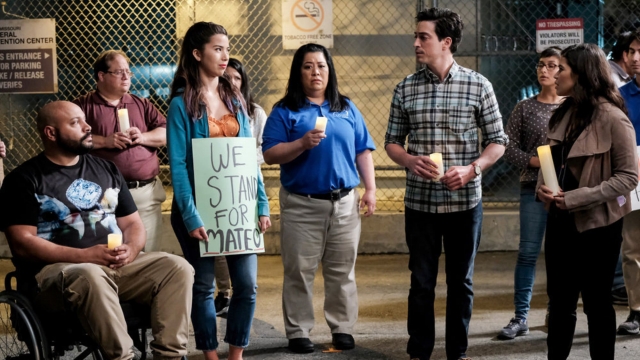 Immigration is a big issue leading up to the 2020 election. Beyond the headlines and political speeches, scripted television series like "Superstore" are adding more emotional weight to the discussion.

Jose Antonio Vargas, founder of Define American: "When you watch a TV show — talk about character development — you literally follow the character episode to episode, experience through experience. So it feels almost intimate, right?"

A new report from the Norman Lear Center and the progressive-leaning organization Define American studied not just how these portrayals look and feel — they analyzed the shows' impact on audiences.

Researchers found that, for many viewers, exposure to immigration storylines on TV could reduce prejudice — particularly among viewers that don't have much contact with immigrants in real life. Experts say that's because viewers can develop "parasocial relationships."

Melissa Avdeeff, professor of culture and media at Coventry University: "Usually, we use the term 'parasocial' to describe relationships we have with famous individuals, where they seem quite familiar to us. … We feel like we know them, because we welcome them into our home. We feel like we have this illusion of intimacy."

The phenomena of parasocial relationships extend from real-life celebrities to fictional characters as well, and if you have a favorite TV show, you probably know what it feels like.

For sitcoms like "Roseanne" or "Schitt's Creek," viewers may start to feel like they're part of the family. And even for fantasies like "Game of Thrones," audiences can experience what feels like real grief.

"Superstore" centers on the employees of the fictional big-box store "Cloud 9." It's your typical half-hour workplace sitcom with hijinks, oddball characters and some very relatable jokes about retail.

One of the major characters is Mateo Liwanag, a gay Filipino immigrant who learns in season one that he's undocumented. Throughout the series, this plays a role in the character's work life and personal relationships. But at the same time, the show portrays Mateo's day-to-day life in a way that's just as normal and relatable as his co-workers.

Antonio Vargas: "The opportunity here for storytellers is to actually see this issue of immigration that is so partisan and so controversial and then to strip it of that, and actually make it really specific to a person who's living through it."

In season four, after viewers have gotten to know Mateo, the show adds this element of reality …

Antonio Vargas: "That shot of him, that panning shot with him, while locked up inside that ICE van is etched in my memory forever."

The emotional weight of Mateo's storyline resulted in political reactions from viewers. According to researchers, "Viewers who experienced a sense of friendship with Mateo were more likely to support an increase in immigrants coming to the U.S." In terms of action, viewers were also more likely to speak to friends about immigration issues or write an immigration-related social media post.

Antonio Vargas: "All of a sudden, it's real. It's not Democrat or Republican. It's not the border. It's not the wall. … That's been the beauty of seeing, you know, this Mateo character really evolve, and really be seen as a three-dimensional human being, which all people are, which immigrants are."