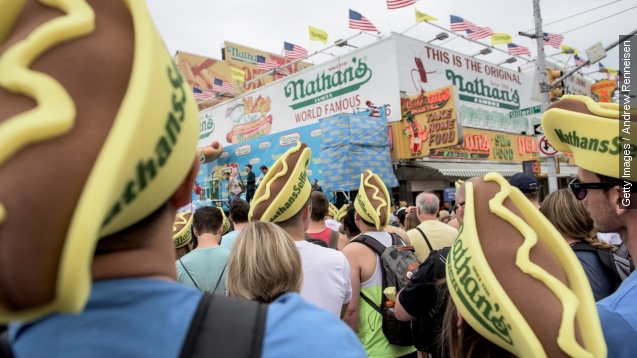 Nathan's Hot Dog Eating Contest kicked off on Coney Island in New York, pitting 20 hungry contestants against each other in the July 4th battle for gastronomic supremacy. And we have a new champion.

Favored from the beginning was Joey Chestnut, who'd won every year since 2007 and holds the all-time record — 69 hot dogs in 10 minutes.

“And he crushed the record!" (Video via ESPN)

But this year, Chestnut's reign came to a stunning end at the hands of Matt Stonie, who scarfed 62 hot dogs to Joey's mere 60.

"Paul, I think this kid is going to to do it! This would be a huge upset! This would be 'Nova over Georgetown in ’85, this would be the Pats over the Rams in Super Bowl XXXVI. Youth is speaking in Coney Island today," said the announcer.

The spectacle is pretty awesomely appalling, but that doesn't stop 50,000 New Yorkers from showing up to watch in person or millions more from tuning in on ESPN. (Video via Major League Eating)

But then again, it's not really about the dubious aesthetics or prodigious ability of these dog-munching athlet— well, Americans. It's about the hot dog, and its singular place in American life. (Video via New York Post)

Nobody knows exactly from whence it came, only that like America itself, it's a product of immigrants — in this case German immigrants, who brought over the bratwurst and frankfurter in the 19th century. (Video via The Library of Congress)

And while brats are fine, it wasn't until someone started putting them on buns and mixing up the meat that the "hot dog" was born — a name taken either from its resemblance to the body of a dachshund or, allegedly, from the type of meat put in its early variants. (Video via The Science Channel)

Either way, hot dogs became an American phenomenon and a symbol of how American life is the sum of our immigrant experience. (Video via Food Network)

Today, we eat them at ball games and barbecues and, yes, gross eating contests. We even have motorized giant hot dogs that drive coast-to-coast passing out little hot dogs, like a nesting doll made of meat. (Video via National Geographic and Wisconsin Public Television)

And so however you're celebrating July 4th, eat a hot dog, and take a moment to enjoy it — unless you're in an eating contest, which in case, good luck.