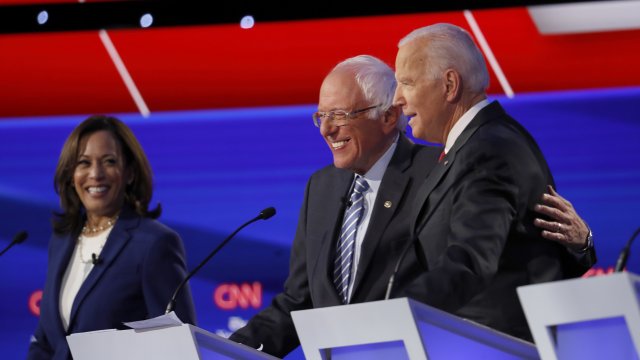 On Sunday, the two leading Democratic candidates in this year's presidential race picked up some notable endorsements.

Senator Kamala Harris formally endorsed Joe Biden in a Twitter video, saying she would do everything in her power to help elect the former vice president. Here's more of what she  had to say.

"I just wanted you guys to know that I have decided that I am, with great enthusiasm, going to endorse Joe Biden for President of the United States. ... One of the things that we need right now is we need a leader who really does care about the people and who can therefore unify the people."

Harris, who dropped out of the presidential race in December, says she will attend an event with Biden in Detroit on Monday.

In endorsing the Vermont senator, Rev. Jackson said "The most progressive social and economic path gives us the best chance to catch up and Senator Bernie Sanders represents the most progressive path. That's why I choose to endorse him today."

Jackson's endorsement of Sanders may not come as a surprise, as the two have a history. Sanders endorsed Rev. Jackson during Jackson's bid for the Democratic nomination in the 1988 presidential election.

Both endorsements come before another round of primaries on Tuesday in six states, including Michigan, Washington state and Missouri.