Is A Job Guarantee Possible In America? 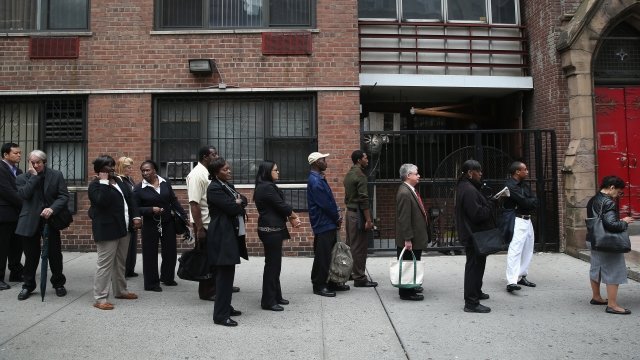 A country where everyone is guaranteed a job; it sounds far-fetched here in the US, where the country has had a roller coaster economy over the past 10 years. But the idea of a job guarantee is gaining momentum among some high-profile Democrats.

Proponents of the program compare it to other social safety nets, like public education and social security.

"Economies go through cycles. They go through booms and busts. People lose their jobs, they find new employment opportunities, but there really isn't an option there for them that will hold them in well-paid employment when the private sector doesn't provide those jobs," said Pavlina Tcherneva, research associate of the Levy Economics Institute.

A job guarantee bill proposed by Sen. Cory Booker (D-N.J.) was co-signed by Sen. Elizabeth Warren (D-Mass.), Sen. Kamala Harris (D-Calif.), Sen. Kirsten Gillibrand (D-N.Y.), and Sen. Jeff Merkley (D-Ore.). But it's getting attention outside of Washington, too. According to a poll from the liberal think tank Data for Progress, it's a fairly popular idea across the country. The results from another recent survey wasn't very far off. It still has plenty of critics, though.

"I think one issue here that's kind of usually under discussed is what a job guarantee would mean for workers' incentives," said Ryan Bourne, R. Evan Scharf Chair for the Public Understanding of Economics at the Cato Institute. "Some proponents of this scheme have kind of suggested that, yes, workers will be guaranteed work but when they're in work, they wouldn't be judged according to ordinary kind of private sector efficiency criteria or on a commercial basis. So, it's very difficult to imagine that workers would be willing to work as hard if it was very difficult to get laid off for not doing your job to the best of your ability."

Beyond how it would change the nature of work, there's another aspect that's frequently debated among the program's supporters and detractors: how much it would cost. 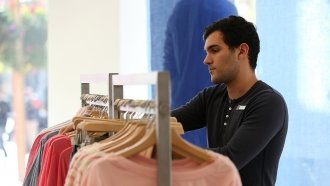 "If you're talking about a $15 an hour job guarantee for a full-time worker, that's around $32,000 a year cost in direct labor costs alone. When you add that the proposed benefit package, including provision of health care, the administration, the materials of the workers and the delivery, you're looking at anywhere up to about $40,000 per worker as a lower bound of cost," Bourne said.

According to estimates from the Levy Economics Institute, a job guarantee would cost 1 to 2 1/2 percent of GDP but could increase GDP by more than that. Advocates also say we're already paying to maintain unemployment and the social costs that come with it.

"The job guarantee is a net positive," said Tcherneva. "It's not a cost to the economy. It's a net contribution. So I urge people to think about the real cost of unemployment and the fact that we can simply be redirecting our resources to employing the unemployed."

The unemployment rate currently stands around 4 percent and the economy is considered strong. However, millions of Americans remain underemployed or haven't seen their wages increase since before the recession.