Jill Stein Has A (Terrible) Plan For Bernie Sanders' Campaign 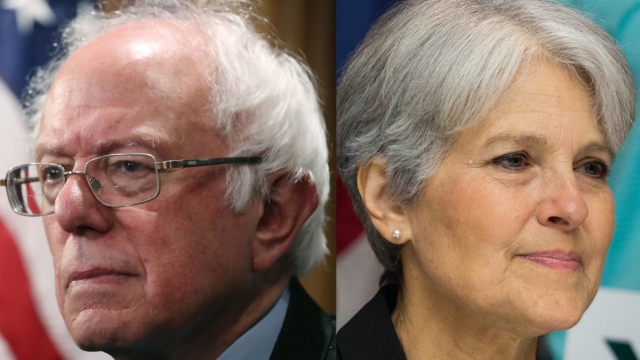 SMS
Jill Stein Has A (Terrible) Plan For Bernie Sanders' Campaign
By Eugene Daniels
By Eugene Daniels
July 8, 2016
Not even a political revolution could score the Green Party the presidency this year.
SHOW TRANSCRIPT

If you're pissed Bernie Sanders won't be elected president this year, Jill Stein may have a solution for you. Stein is the Green Party presidential candidate, but she says she would step aside and let Sanders and his political revolution move on in.

Stein told The Guardian she sent Sanders an email at the end of the primary season asking him to get on board but never heard back. She said Sanders' full-throated faith in the Democratic Party won't fly with many of his supporters, adding, "That political movement is going to go on — it isn't going to bury itself in the graveyard alongside Hillary Clinton."

It's a nice gesture, but this couldn't be a more terrible idea for Sanders right now. Sorry, Stein.

Putting on a green jersey for this election is a guaranteed loss for Sanders. The Green Party is currently only on the ballot in about 20 states; that's barely enough to come in second. It will be much easier for Sanders to oversee his political revolution from the comfort of his Senate seat.

SEE MORE: This Is Why Sanders Is Voting For Clinton But Staying In The Race

After losing to Clinton this year, Sanders has been able to move both Clinton and the Democratic Party overall farther to the left. A recent draft of the Democratic National Committee's platform was chock-full of Sanders' ideas. And just this week, Clinton adapted his free college plan, expanding her original proposal to free college for more than 80 percent of Americans.

And Sanders has made it clear he's shifted his focus on making his newly adopted party stronger and keeping Donald Trump out of the White House. That's impossible to do while heading up a third party.

Stein may be too late on this anyway; by most accounts, Sanders is this close to endorsing Clinton next week.