Behind The Lens: The Journey Documenting Navajo Code Talkers 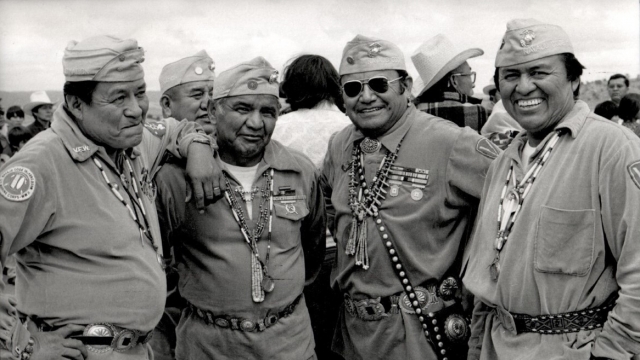 SMS
Behind The Lens: The Journey Documenting Navajo Code Talkers
By Meg Hilling
By Meg Hilling
March 17, 2022
Japanese photographer Kenji Kawano is working on a project nearly 5 decades in the making: preserving the legacy of Navajo Nation Code Talkers.

For nearly 50 years, Kenji Kawano has been photographing the Navajo Code Talkers of World War II throughout America's southwest.

It's a lifelong project that began with a ride from a stranger while hitchhiking on the Navajo Nation.

"I think it was the summer of 1974 when I was hitchhiking and one vehicle stopped by to pick me up," Kawano said. "The Navajo guy said, 'Where you come from?' I said, 'Japan.' Then he said, 'Oh you're Japanese. Do you know about the Navajo Code Talkers?'"

Kawano knew nothing about the Navajo Code Talkers. As a young photographer, he had only recently come to the U.S. and was trying to take pictures of daily life on the Navajo Nation.

"So he explained to me, 'Do you know World War II? About 400 young Navajos headed to the south Pacific to fight against the Japanese,'" Kawano continued. "He told me, 'We use our language as a weapon and we spoke Navajo, so we are the U.S. Marines' Navajo Code Talkers.'"

Kawano says that man was none other than Carl Gorman, who was one of the original 29 Navajo Code Talkers who helped create the code used by the U.S. Military.

Despite not knowing English or Navajo, Kawano says he slowly began meeting other code talkers. By 1986, he began taking photos of them for his book "Warriors." Some were hesitant to speak with him, at least at first.

"They say 'Yeah, you can take a picture of me and [I'll] give you my name, but that's it. I don't want to say anything more because you are former enemy,' something like that," Kawano said.

While listening to their war stories, he says he kept his role as photographer in focus.

"My father was in the Japanese Navy during World War II," Kawano said. "I try to think, 'Kenji, you are a photographer. Don't think about which nationality you are.' I'm a photographer. I like to take pictures of them."

And he says that mentality led to some incredible conversations.

"One of the code talkers said 'Kenji, war is bad. I went to fight with Japanese. I don't hate or am against the Japanese. War is between governments. I have no anger towards you.' And I had a good relationship with many code talkers," Kawano said.

So much so, he was made an honorary member of the Navajo Code Talkers Association.

"That is one of my treasures," Kawano said, pointing to a plaque.

He found a new place to call home on the Navajo Nation, eventually marrying and raising a family there.

Over the years, Kawano says he has spent countless hours on the road searching for Navajo Code Talkers on the Navajo Nation. It's a task he jokes he has spent more time on than the actual photo sessions.

With fewer than a handful of code talkers still alive, Kawano says he loves when families reach out to him about the photos.

Some of his photos are on display at the Navajo Nation Museum in Window Rock, Arizona.

"As far as relatives, you know, obviously, that's going to have a profound effect on them as well to know that their father or their grandfather or great grandfather is memorialized by Kenji Kawano," said Benjamin Gilbert Sorel III, Navajo Nation Museum Associate Register. "And his lifelong passion to building a relationship with the code talkers and capturing them, not just as Marines, but as people and as Navajos."