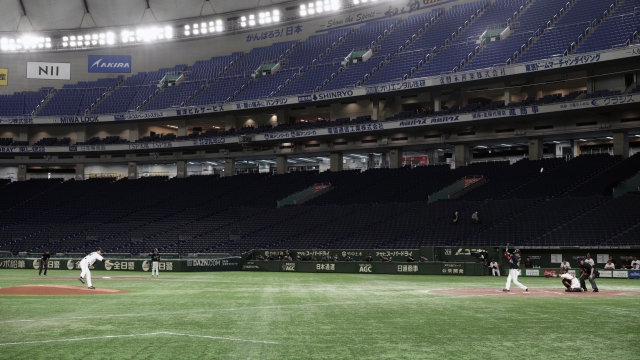 SMS
How Sports Around The Globe Are Coping With Coronavirus
By Gage Jackson
By Gage Jackson
March 2, 2020
With more than 80,000 confirmed cases around the globe, sports leagues are making efforts to cope with the coronavirus outbreak.
SHOW TRANSCRIPT

In the midst of the coronavirus outbreak, which has now spread globally, you may have noticed that some sporting events feel a little different:

Stadiums that typically host thousands of cheering fans are empty. Elite runners aren't racing down crowded streets lined with supporters. And some events have been canceled or postponed entirely.

This could be the new look of sports during the outbreak.

This is a professional baseball game in Japan; doors have been closed to fans. Japan has confirmed 250 cases and six deaths related to the virus.

"Well, I think the players will realize just how much the fans really are a part of the game. It is a little quieter. The balls jump off the bat a little bit more. You can hear the smack of the ball and the bat meet a little bit more. But it's still the game. You still got to go out there and do your thing."

It could also present issues for the Tokyo Summer Olympics, which are less than five months away. The president of the International Olympic Committee is not worried and says Olympic officials are "fully committed" to hosting the games as scheduled.

But this issue, of course, is not unique to Japan. The outbreak has also caused disruptions in some European soccer leagues.

Five matches in Italy were postponed following a spike in confirmed cases. And the Swiss Football League postponed all of its matches last weekend after the government banned events with more than 1,000 people.

As officials continue to monitor the rapid spread of the coronavirus, we could see more cancellations in the future.