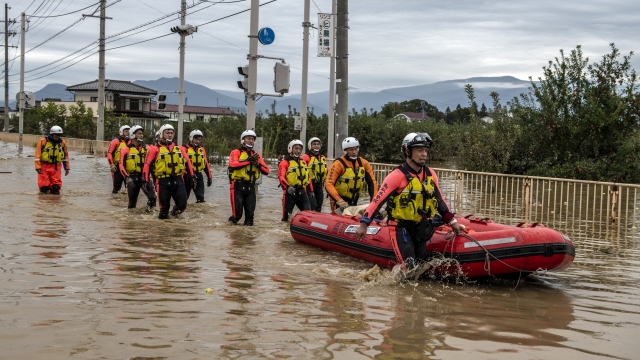 More than 100,000 search and rescue personnel are looking for survivors in Japan, after a typhoon wreaked havoc across multiple parts of the country.

Typhoon Hagibis is one of the most powerful storms to have directly hit Japan in six decades. It made landfall on Saturday.

Japanese broadcaster NHK says as of Monday morning the typhoon killed at least 49 people and injured more than 200 others. That death toll is expected to rise as crews continue to search for survivors.

The storm also brought with it torrential rain, landslides and massive flooding — all of which resulted in widespread damage. Local outlets report more than 100 rivers overflowed. And more than 35 inches of water fell on a city west of Tokyo, breaking the country's record for the most rainfall in a 24-hour period.

More than 230,000 residents were evacuated before the storm made landfall. And evacuation orders were issued to millions more after Typhoon Hagibis hit.

Japanese Prime Minister Abe Shinzo expressed his condolences on Sunday and said officials were working on recovery efforts, including restoring power to homes and getting the country's transportation services back up and running.

Typhoon Hagibis came as parts of Japan were still recovering from another typhoon that made landfall near Tokyo in September. That storm injured dozens of people and damaged some 30,000 homes.