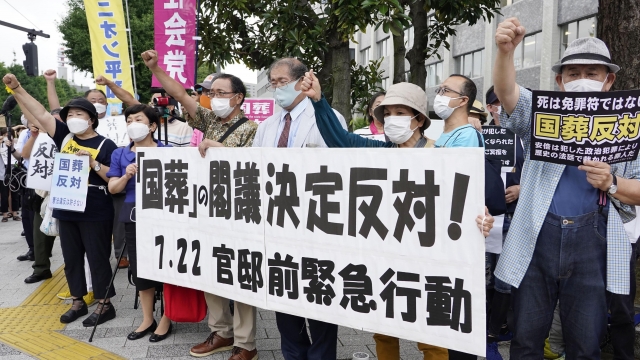 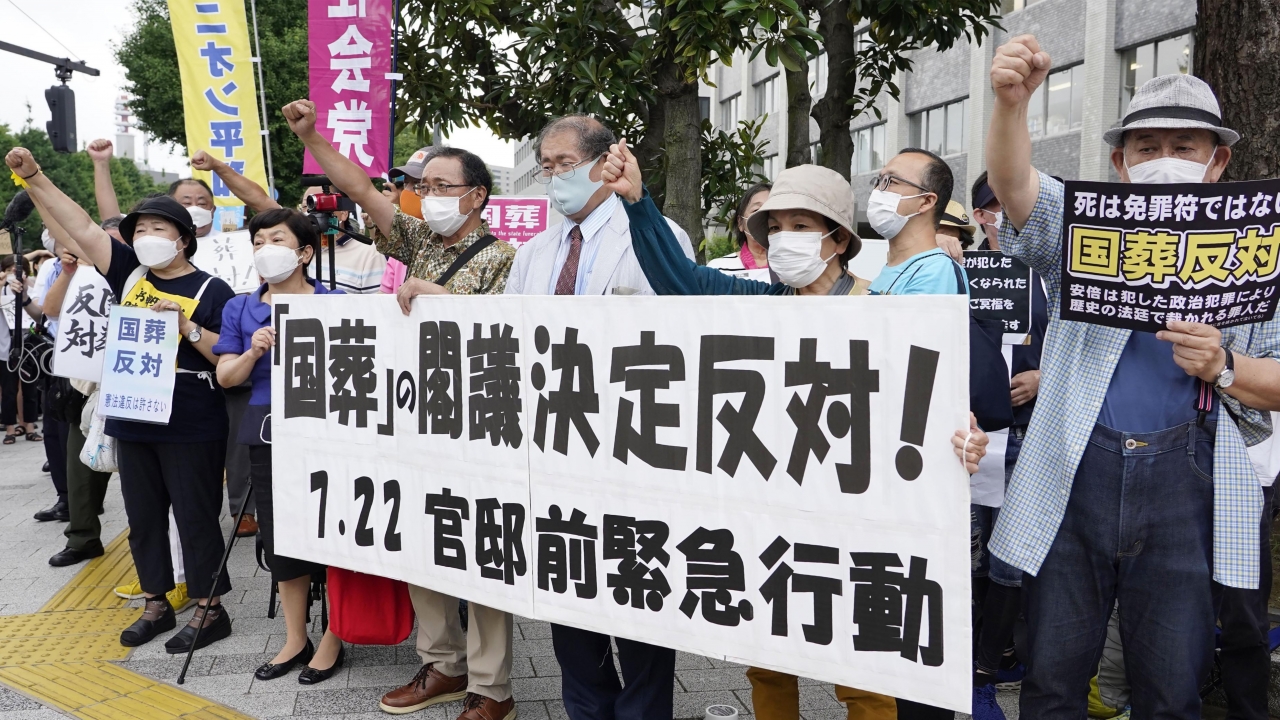 Japan's Cabinet on Friday formally decided to hold a state funeral on Sept. 27 for assassinated former Prime Minister Shinzo Abe amid national debate over the plan, which some criticize as an attempt to glorify a divisive political figure.

Abe was gunned down earlier this month during a campaign speech in the western city of Nara, shocking a nation known for safety and strict gun control. The alleged gunman was arrested immediately after the shooting and is being detained for interrogation as authorities seek to formally press murder charges.

Chief Cabinet Secretary Hirokazu Matsuno said a state funeral is appropriate because of Abe's "distinguished contributions" as the longest-serving Japanese leader and his "outstanding leadership and decisive actions" in broad areas including economic recovery, the promotion of diplomacy centered on the Japan-U.S. alliance, and reconstruction following the 2011 tsunami disaster.

Matsuno said the funeral will be a non-religious ceremony held at the Nippon Budokan, an arena originally built for the 1964 Tokyo Olympics that has since become a popular venue for sports, concerts and cultural events. The government also holds an annual memorial service on Aug. 15 marking Japan's World War II defeat at the arena.

Foreign dignitaries will be invited to Abe's state funeral, Matsuno said, though further details, including the estimated cost and number of attendees, are yet to be determined.

Prime Minister Fumio Kishida last week announced plans for a state funeral that some see as a move to stabilize his grip on power by pleasing ultra-conservatives who backed Abe, who led the biggest party wing.

The plan has received a mixed reaction from opposition leaders and the public. Some oppose the use of tax money on the event, while others criticize Kishida's governing party for politicizing Abe's death to glorify him and attempt to end debate over his highly divisive legacy, including his hawkish diplomatic and security policies and revisionist stance on wartime history.

On Thursday, a civil group opposing plans for Abe's state funeral submitted an injunction request asking the Tokyo District Court to suspend the Cabinet decision and budget for the event, saying a state-sponsored funeral without Parliament approval violates the constitutional right to freedom of belief.

Dozens of protesters stood outside the Prime Minister's Office on Friday to oppose the Cabinet decision. An opposition leader, Mizuho Fukushima, said the decision was not based on public consensus, has no legal basis and should be scrapped.

Abe's private funeral was already held at a Tokyo temple and attended by about 1,000 mourners, including lawmakers, business leaders and others.

Abe's assassination shed a light on his and his party's decades-long questionable links to the Unification Church.

The alleged assassin, Tetsuya Yamagami, 41, has told police that he killed Abe because of his links to a religious group that he hated. His reported accounts and other evidence suggest he was distressed because his mother's massive donations to the church had bankrupted the family.