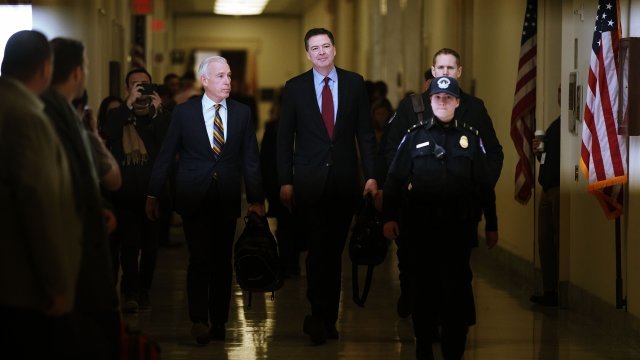 By Sebastián Martínez Valdivia
December 7, 2018
GOP lawmakers complained about Comey's responses to their questions, which were limited by a Department of Justice lawyer.
SHOW TRANSCRIPT

"One of the disappointments in this deposition so far has been the amount of times in which the FBI believes Congress doesn't have a right to know," Rep. Darrell Issa told reporters.

Republicans complained Comey's answers were limited by a Department of Justice lawyer who, according to them, repeatedly stopped Comey from responding to questions. Comey had asked for the hearing to be public, but agreed to a compromise where his testimony will be published within 24 hours.

For his part, Comey said he wasn't sure the hearing was needed at all, but said he'd be back for another session December 17.

"When you read the transcript you will see that we are talking again about Hillary Clinton's emails, for heavens sake."

The two committees that organized the hearing are spearheaded by House Republicans investigating allegations of political motivations behind FBI investigations into Hillary Clinton's email server and Russian interference in the 2016 election.

Republicans will lose control of the committees involved in the probe when Democrats take over the House next month. Congressional Democrats have accused the investigation of trying to undermine Special Counsel Robert Mueller's ongoing investigation.