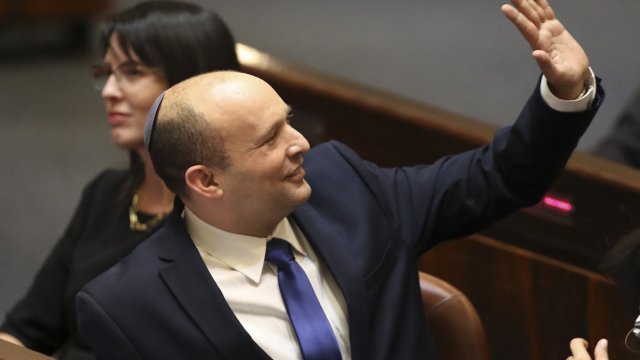 A new government in Israel — marking the end of Benjamin Netanyahu as prime minister and the promise of a return to normalcy... after a politically turbulent past two years.

Naftali Bennett, the head of a small ultranationalist party, is now taking over as prime minister... and...to keep the job...he'll have to balance an eight-party coalition.

That's because if just just one of the eight wavers in their united opposition to Netanyahu, the new government could lose its majority, giving the long-running leader — still on trial for corruption — a chance to regain the power he has vowed to take back.

The possibility of one faction swapping their support was evident as Bennett addressed parliament and was repeatedly interrupted and heckled by Netanyahu's supporters.

And the divide in the chamber is echoed among Israelis. The night before the vote, hundreds gathered outside Netanyahu's residence, where they have each Saturday for almost a year, to demand his resignation.

"We are celebrating a year of civil fights that everybody told us that it won't work," protester Maya Arieli said. "But, tomorrow a new government is going to be in Israel finally, and it proves that the civil fight works."

But others aren't confident the new government will stick *and make progress, with one predicting "This will not last more than a month," and another saying Netanyahu was sometimes all talk, but his leadership of 12 years gave Israeli people security.

Netanyahu is banking on the new government being *insecure, saying it will give in to U.S. efforts to revive Iran's nuclear deal and also make concessions to Palestinians.

The president of the Israel Democracy Institute says the government has a difficult path ahead with a narrow majority, but he says the bar for performance is low, and that having to reach a consensus on many issues could restore Israelis' confidence in the country's politics.

"So, I wouldn't rule out the option of a long-serving government, although the odds are not necessarily extremely promising," Yohanan Plesner, president of the Israel Democracy Institute, said.

If the new government lasts, Yair Lapid — a political centrist driving the new wave — will become prime minister in two years, after serving as Israel's new foreign minister until then.