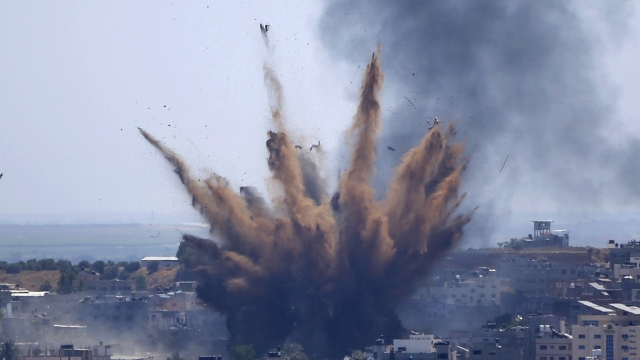 SMS
Israel Prepares Troops As Rocket Fire Escalates
By Simon Kaufman
By Simon Kaufman
May 13, 2021
Israel says it will continue to counterstrike Hamas for rockets coming into Israel.
SHOW TRANSCRIPT

Israel is preparing to station troops along its Gaza border, saying it will continue to counterstrike Hamas for rockets coming into Israel.

The United Nations is calling for an end to the violence and warns the situation could be escalating toward a full-scale war.

"Hamas and other militant groups, indiscriminate launching of rockets and mortars, from highly populated civilian neighborhoods, towards its civilian population center violates international humanitarian law, and is unacceptable, and has to stop immediately." said Stephane Dujarric, spokesperson for the United Nations Secretary-General. "While recognizing Israel's legitimate security concerns, Mr. Wennesland also reiterated that Israeli authorities must also abide by their responsibilities under international law, and that Israeli security forces should exercise maximum restraint."

Israel's military took out a building in Gaza. It says Hamas was operating out of the facility.

Gaza officials say more than 60 Palestinians have died in the conflict including at least 16 children.

Israel says a number of those deaths are militants.

And in Israel, the military says a rocket hit in one neighborhood near Tel Aviv.

An Israeli soldier and a child were killed by another rocket attack yesterday.

"Israel has a right to defend itself when you have thousands of rockets flying into your territory," he said. "But, I had a conversation ... with the Prime Minister of Israel. And, my hope is that we'll see this come into conclusion sooner than later."

In the U.S., thousands rallied in major cities for both sides in this conflict.