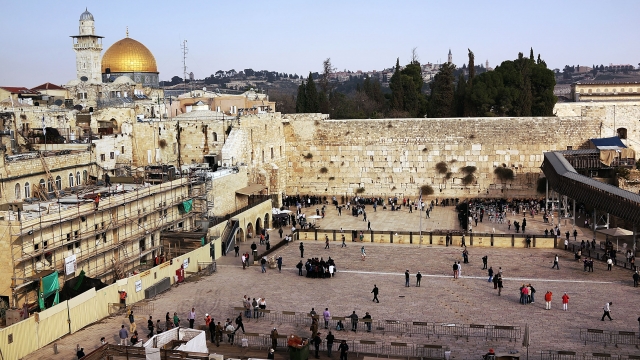 SMS
Israel Agrees To Let Men And Women Pray Together At The Western Wall
By Ethan Weston
By Ethan Weston
January 31, 2016
After years of protests, men and women are getting a permanent space to pray together at Jerusalem's Western Wall.
SHOW TRANSCRIPT

The Israeli government announced Sunday that a permanent space for men and women to pray together would be built at Jerusalem's Western Wall.

The Western Wall is the last remaining part of the ancient Holy Temple of Jerusalem, and is one of the holiest sites in Judaism.

For decades, Orthodox rules have governed the site, separating men from women and forbidding women from praying out loud or reading from the Torah.

For 27 years, a group called "Women of the Wall" has been protesting those rules, demanding the right to pray in non-Orthodox ways.

This has resulted in counter-protests in the past and security forces have had to get involved.

Three years ago, Natan Sharansky, the chairman of the Jewish Agency, proposed a new egalitarian prayer space as a compromise, but it was only considered a temporary solution.

The new rules will put the egalitarian area under control of a new group. That area will stay separate from the Orthodox area, which will stay the same. But until construction is complete, "Women of the Wall" plan to continue to pray in the existing space.

This video includes images from Getty Images and the Israel Ministry of Tourism / Noam Chen / CC BY ND 2.0.