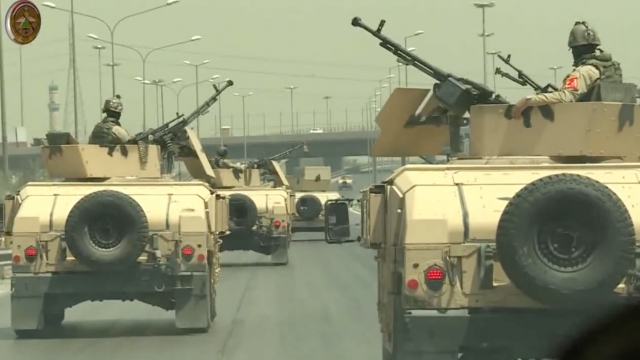 SMS
ISIS Is Willing To Use Civilians As 'Human Shields' To Keep Fallujah
By Melissa Prax
By Melissa Prax
June 5, 2016
U.S. and Iraqi forces face many problems as they try to take back Fallujah, an ISIS-controlled Iraqi city.
SHOW TRANSCRIPT

U.S. and Iraqi forces are trying to take back one of ISIS' Iraqi jewels — the city of Fallujah.

In 2014, Fallujah became the first Iraqi city ISIS took over. About 30 miles west of Baghdad, Fallujah has become a relentless target of conflict since the U.S. invaded Iraq over a decade ago.

For ISIS, having a mainstay in Iraq's largest province means access to a large population to finance its operations.

The province also has roads that lead to other key cities — like Baghdad and others in Syria.

But taking back Fallujah means displacing thousands of nearby Iraqi residents — several of whom have died during evacuations over the past week.

Those evacuations began at the end of May, when the U.S. and Iraqi forces announced they would be accelerating operations to take back the city.

Those who evacuated are able to finally get food and water, since aid groups haven't been able to get to the city since last September.

But an estimated 50,000 residents are unable to flee the city and are now under threat of U.S.-backed airstrikes — a main method of fighting to claim back Fallujah.

The U.S. Defense Department said, as of Friday, there have been 65 airstrikes that have hit over 300 enemy fighters.

Fallujah — and ISIS' other stronghold Mosul — are the last two cities in Iraq the terrorist group has a tight grip on.

And ISIS isn't letting Fallujah go without a fight. For many locals, that means men who don't join the fight risk being added to a rising number of executions.

ISIS has threatened to do the same for those trying to leave and plans to use civilians as "human shields" to deter U.S. and Iraqi forces from advancing to the city.

This video includes clips from Alaan, ISIS, the Iraqi Ministry of Defense, Fallujah Channel, the United Nations and the U.S. Department of Defense.