Americans Say These Countries Are The U.S.’s Greatest Enemies 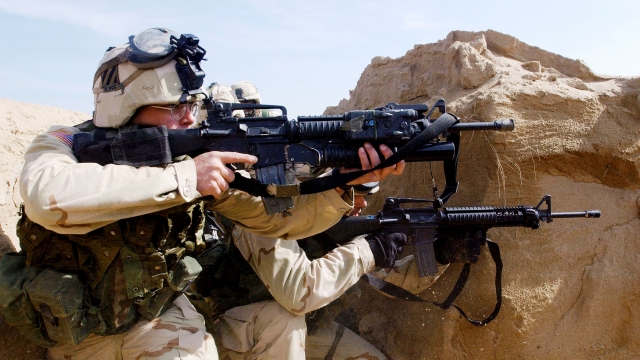 SMS
Americans Say These Countries Are The U.S.’s Greatest Enemies
By Ryan Biek
By Ryan Biek
February 23, 2016
Polling company Gallup asked Americans who they thought was the country's No. 1 enemy.
SHOW TRANSCRIPT

Amid all the recent talk about ISIS, pollsters say the terrorist group might actually fall pretty low on Americans' list of concerns.

Gallup recently asked people which country they thought the U.S.' greatest enemy was. And for the third year in a row, the top four spots were held by the same countries: North Korea, Russia, Iran and China.

Each of the four received between 12-16 percent of the vote. To compare, only 5 percent said countries in which ISIS operates.

The reason for these numbers might be that military power isn't the only cause for concern — nuclear capabilities and economics can also play a role.

Meanwhile, ISIS lacks a nation-state's infrastructure. Just last month, the U.S. military said it literally blew up millions of the terrorist organization's dollars sitting in a building in Iraq.

The country Americans worry about most changes from year to year, though. This year, it's North Korea, but it was Russia last year and China the year before.

Yet, while China is a polarizing country, with 44 percent of Americans actually having favorable opinions, minds are pretty well made up on North Korea, with only 8 percent favoring the country.

Even the aspect that makes a country appear most threatening fluctuates. Gallup cited nuclear power more for Iran than China or Russia, despite that Russia and China both openly hold nuclear weapons, and Iran is still — publicly at least — trying to develop them.

A final takeaway: The top spot for greatest perceived enemy is getting less and less secure.