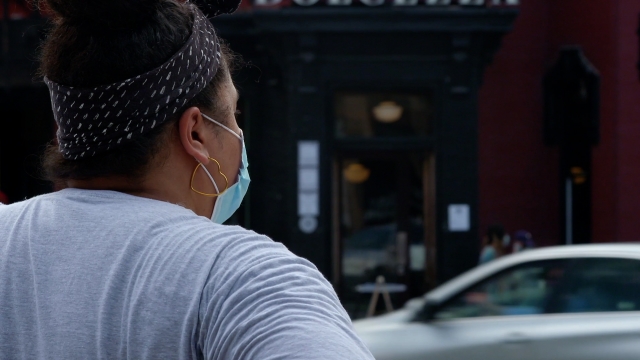 SMS
Is The U.S. Ready For A National Lockdown?
By Cat Sandoval
By Cat Sandoval
November 20, 2020
Countries like France, Germany and China have imposed lockdowns. Doctors say they are effective, but can one be enforced in the U.S.?
SHOW TRANSCRIPT

With record-breaking numbers — more than 250,000 Americans dead from COVID-19 — is it time to consider a national lockdown? After all, countries in Europe have done it, and it appears to have helped. Same with China.

"I think a national lockdown where we lock everything down would ultimately be a last resort," said Dr. Georges Benjamin, Executive Director,  American Public Health Association.

But what defines a "lockdown"? To some it can mean closing non-essential businesses, but what is considered essential in one state may not necessarily be essential in others. It could also include stay-at-home orders. And then there's a question of schools. This inconsistency can create confusion.

"The term lockdown really is a terrible term and we should talk about restricting exposure. So, for example, we know that anything where there's a large, large crowd creates a greater risk," said Benjamin.

And it's about reducing that risk. But even if we define what a national lockdown is, enforcement could be a problem. In Berlin, German police used water cannons to disperse demonstrators protesting restrictions.

"Convincing people to do that will be a challenge. ... As you know, we cannot convince every American to wear a simple cotton mask," said Benjamin.

"We saw what happened in China. They did an extreme lockdown scenario and they got really significant control over the epidemic. ... because of the authoritarian government and the differences in human rights," said Dr. Mark Dworkin Associate Director of Epidemiology at the University of Illinois at Chicago. "In this country, we would have a great deal of trouble with such enforcement. I don't even know if it's completely legal."

COVID-19 advisor to President-elect Joe Biden, Dr. Michael Osterholm, initially said a national lockdown for a few weeks could help curb the spread of COVID-19 but he backtracked because he said it would be hard to get a national consensus. Even Dr. Anthony Fauci pushed for public health measures instead.

He said,"Public health measures, not lockdown of the country, but public health measures that are rather simple and easy to understand — the universal wearing of masks, the physical distancing, the avoiding congregate in crowded places, outdoors better than indoors, washing hands."

Dr. Georges Benjamin agrees and he says targeted restrictions instead of a national lockdown can help.

"We can have both a reasonable economy and protect our health if we do it thoughtfully. And so the idea of having targeted closures at particular times for particular businesses and other activities allows us the ability to in some ways have it both ways."

"We're in New York City. People are going to travel, they're gonna go between ZIP codes and neighborhoods," says John, a Brooklyn resident.

And it's not just between neighborhoods, some travel in between states, which can have varying degrees of restrictions.