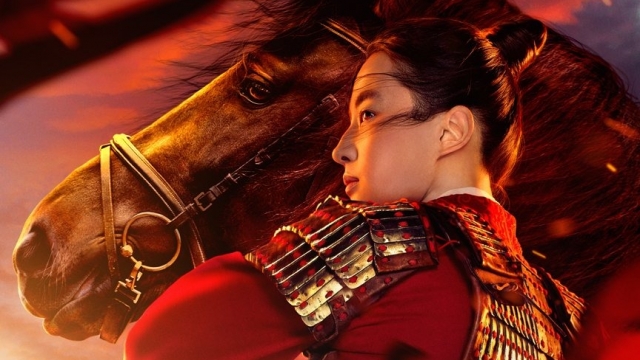 SMS
Is 'Straight-To-Streaming' The New Normal In Hollywood?
By Casey Mendoza
By Casey Mendoza
August 5, 2020
​With a budget of $200 million, "Mulan" is one of the most expensive movies to bypass theaters because of the pandemic.
SHOW TRANSCRIPT

By now, you've probably heard that "Mulan" won't be going to theaters in the U.S.

Walt Disney Co. CEO Bob Chapek says, "We see this as an opportunity to bring this incredible film to a broad audience currently unable to go to movie theaters."

With a budget of $200 million, "Mulan" is one of the most expensive movies to forgo theaters because of the pandemic. Re-telling the story of a young Chinese woman who disguises herself as a man to become a soldier, the live-action remake was originally supposed to be Disney's flagship summer blockbuster.

We can't say exactly how much money "Mulan" could've made in pre-pandemic theaters. But we do know that Disney's 2019 remakes of "Aladdin" and "The Lion King" grossed more than one billion dollars each.

Whether that box office success can translate into streaming success is going to be a big question next month.

For context: "Trolls World Tour" made more than $77 million in revenue for Universal Pictures. It was the first movie to go straight to streaming after the start of the pandemic.

Chapek says, "While we view this as a devastating situation for everyone affected, it's also forced us to consider different approaches and look for new opportunities."

As the pandemic continues, these "new opportunities" are squarely focused on streaming and digital platforms. That's especially true for Disney — whose largest source of revenue comes from theme parks — but it's also true for the rest of the entertainment industry.

Last month, AMC and Universal struck a deal to shorten the theatrical window and offer "premium on-demand" rentals after just two weeks. That's unprecedented for the industry, but with no clear future for movie theaters, some are already wondering if it's the new normal.