Is Putin A Terrorist? The First U.S. Senator To Visit Ukraine Says Yes 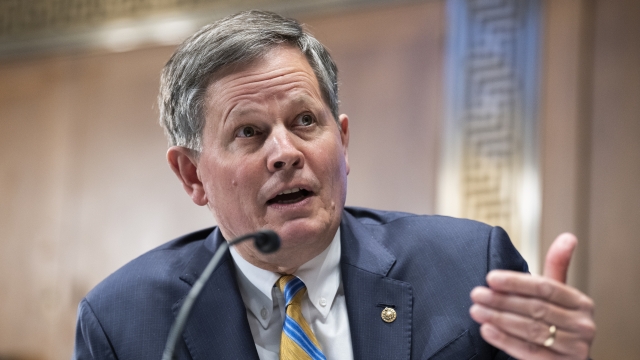 The first U.S. senator to visit Ukraine since the start of the war, Montana Republican Sen. Steve Daines, called Russian President Vladimir Putin a “terrorist” Monday after witnessing firsthand graves containing bodies of civilians in the Kyiv suburb of Bucha.

“It is strength that takes down a bully, not weakness. Weakness invites bullies, and Vladimir Putin, as we said, he's far more than a bully. He's a terrorist,” Daines told Newsy’s Maritsa Georgiou. “He is committing acts of terror ... He is committing war crimes. He is committing atrocities and he needs to be held accountable for it.”

Daines’ comments came after Ukrainian President Volodymyr Zelenskyy directly asked U.S. President Joe Biden to designate Russia a state sponsor of terrorism, according to a report in the Washington Post.

Tuesday, the International Working Group on Russian Sanctions, which includes former U.S. Ambassador to Russia Michael McFaul and dozens of other international experts, issued recommendations for how to put pressure on Putin to end the war. On the list: Designate the Russian Federation as a sponsor of state terrorism.

Sen. Daines traveled to Kyiv and Bucha last week with Republican Rep. Victoria Spartz of Indiana, who is Ukrainian American, at the invitation of a former Ukrainian Parliament member.

“The smell of death is something I'll never forget. We were literally on the edge of this of this trench watching the bodies being exhumed, watching bodies being pulled out and then taken to a tent where there were forensic investigators who were processing the crime scene,” Daines told Newsy.

“They said, ‘Senator, we want you to see this,’ so they actually unzipped a bag. ‘We want to show you the wounds, see the bullet wounds in the back of the head.’ It's horrific, horrific images I hope nobody ever would see in their lives.”

On Monday, Daines said he was working on a final draft of a letter to President Biden laying out takeaways from his trip to Ukraine, including calling for restoring a diplomatic presence in Ukraine, saying it was a “conspicuous absence of American leaders” that drove him to visit.

“Prime ministers, presidents, members of Parliament from many European countries have visited Ukraine. Nobody in the United States visited until we went there on Thursday,” Daines said.

“This will not end until the war ends and the war is not going to end until Ukraine wins the war,” Daines said. “So it's about accelerating the lethal aid, getting in the hands of Ukrainians as quickly as possible, as Putin and the Russians now are resetting for probably more of invasion from the east and from the south.”

His tough stance now is at apparent odds with his voting record in early March, when Daines was one of 31 senators who voted against a $1.5 trillion omnibus spending bill to fund the federal government. That bill included a $13.5 billion aid package for Ukraine.

When asked about the vote, Daines said he voted against the bill not because it contained funding for Ukraine, but rather because the other and much larger parts of the measure were filled with what he considers wasteful spending.

“It's a nice political hit for our colleagues to say, ‘Well, they voted against funding for Ukraine,’” Daines said. “Listen, that probably would have passed unanimously if they would have let it pass standalone. And they could have done that.”

Daines is still finalizing his letter to President Biden, which stops short of calling for Russia to be added to the list of state sponsors of terrorism, but he does support investigations into war crimes. He also wants to see more American leaders go to Ukraine in a show of solidarity. 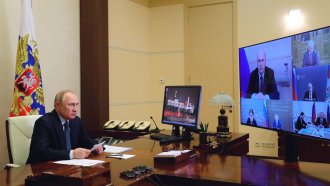 New Evidence Strengthens Call For The Ultimate Sanction For Russia

Jason Blazakis, who worked in the Bureau of Counterterrorism for the U.S. State Department from 2008 to 2018, told Newsy that, legally, the case is strong for adding Russia to the state sponsor of terrorism list. As of 2021, the list consists only of Cuba, Iran, North Korea and Syria. Newsy has reached out to the White House to see if President Biden is considering Zelenskyy’s request to name Russia a state sponsor of terror. This story will be updated when there is a response.