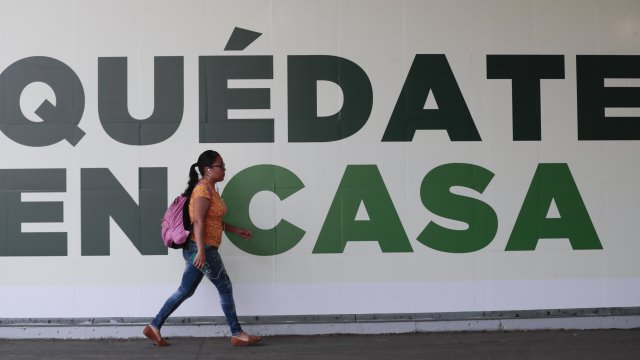 SMS
Experts Worry Mexico's Response To COVID-19 Is Too Little, Too Late
By Ben Schamisso
By Ben Schamisso
April 1, 2020
In a little more than a week, Mexicans have gone from seeing their president hugging supporters to receiving new orders to stay at home.
SHOW TRANSCRIPT

Five days later, he urged Mexicans: "We have to be in our homes. We have to maintain a safe distance."

In a little more than a week, Mexicans have gone from seeing their president hugging supporters to receiving new orders to stay at home and practice social distancing.

By Tuesday, Mexico reported over 1,200 confirmed coronavirus cases, less than 1% of the U.S. total. That partly explains why the Mexican government's response has been slower. But the country is finally gearing up for a spike in cases. And experts wonder if it's too little, too late.

"Yesterday, when I went to a food market where I live, which is a working class neighborhood, it was 95% full, there were no measures in place," said Andalusia Knoll Soloff, a freelance multimedia journalist in Mexico City.

"If those people actually do get infected, then there will be major problems with the hospitals like you're seeing Lombardi and New York," said Heidi Smith, a professor of public policy at Universidad Iberoamericana in Mexico City.

The Mexican government has resisted implementing the full-scale lockdowns seen in nearby countries to avoid hurting the economy. The majority of Mexicans are paid under the table, without a safety net. And more than 40% live below the national poverty line. The government has suggested three months of income support for these informal workers, but it has yet to go ahead with the plan.

"Right now there's no sign that these people will stop working because they say, 'What will kill me, the virus or hunger?'" Knoll Soloff said.

Many experts have criticized the president for his slow and risky approach. But others say the government's overall response has been gradual and consistent.

Smith said: "Immediately the government knew how many beds there were. Immediately the government knew how many tests there were. I'm not saying that there's sufficient amount of tests, but at least they exist and the knowledge is there. And so I think that has boosted the confidence of the average Mexican. And that is not being portrayed in the news right now at all."