Is Jason Kidd's Trade To The Bucks A Kind Of Power Grab? 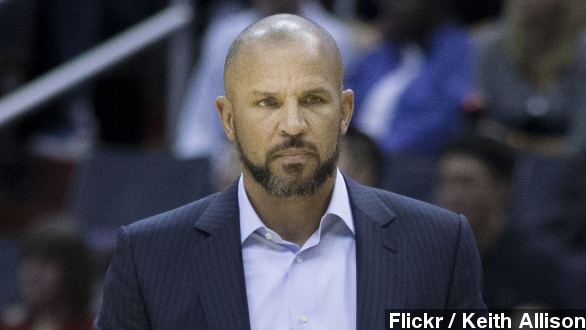 SMS
Is Jason Kidd's Trade To The Bucks A Kind Of Power Grab?

By Jay Strubberg
June 30, 2014
The Milwaukee Bucks traded two future prospects to Brooklyn for head coach Jason Kidd in a move he wanted. But why take over the NBA's worst team?
SHOW TRANSCRIPT

The trade also gets Brooklyn off the hook for the remaining three years of Kidd's contact worth $10.5 million spread out over four seasons. (Via Fox Sports)

But why would Jason Kidd want to leave a decent Brooklyn team to coach the Bucks, who had the NBA's worst record last season at 15-67? One ESPN analyst believes there are a couple factors involved — and, they're familiar ones.

KEVIN NEGANDHI: "What's behind this whole thing?"
CHRIS BROUSSARD: "This is wanting more power in the basketball department. ... Also, money had to play a role. You don't go from Brooklyn to Milwaukee ... if the money is not significantly better."

Kidd was also reportedly excited about the prospect of coaching Milwaukee's top draft pick, Duke standout Jabari Parker, who will likely be in the running for Rookie of the Year. (Via Youtube / Midwest Ballers)

Regardless, SB Nation points out the first leg in Kidd's coaching career is off to a rocky start — at least from a political standpoint.

First, when Kidd took over as coach, Brooklyn struggled, starting off 10-21, then he was slapped with a "$50,000 fine for asking a to player to spill a drink on him to earn a free timeout." Finally, after he turned the Nets' season around and made a pretty decent playoff run, he asked the front office for "more power" over current GM Billy King, which didn't go over too well. (Via Flickr / Matthew D. Britt)

But a writer for Sports Illustrated thinks Kidd's push for a trade — while it seems backhanded — ultimately comes down to job security in an ever-shifting NBA coaching landscape.

"Kidd has long had a clumsy Machiavellian streak — a hunger for control that previously resulted in trades made and coaches fired. ... It's natural, on some level, for Kidd (or any coach) to want power. Their profession is as unstable as ever. Winning coaches are being released left and right. ... Securing the title of team president would insulate Kidd from that fate."