Are Armed 'Guardian Patriots' At US-Mexico Border Breaking The Law? 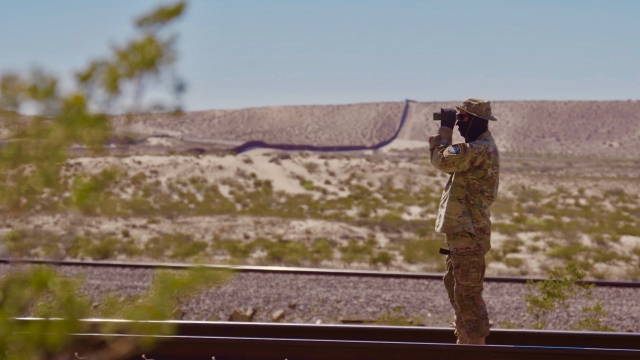 SMS
Are Armed 'Guardian Patriots' At US-Mexico Border Breaking The Law?
By Christian Bryant
By Christian Bryant
May 16, 2019
The armed civilians say they've helped the Border Patrol in apprehending thousands of migrants crossing illegally. But are they legally doing so?
SHOW TRANSCRIPT

Christian Bryant: "How do you justify, like, all the equipment that you have, especially considering the fact that, like, a lot of folks are going to be, you know, nonviolent in a way?"

Viper: "It's a deterrent. When they see all this, they're not going to run. They're going to stop."

In April, Customs and Border Protection detained over 100,000 people along the U.S. southern border — for the second consecutive month. In January, CBP apprehended nearly 60,000 migrants. The government says the recent surge has strained their ability to secure the border. Because of that, a group of people in New Mexico decided to assist — while carrying firearms.

Jim Benvie: "We are a group of ex-law enforcement, ex-military, special forces that served in the military, who basically are strictly volunteers."

The Guardian Patriots have been a controversial presence in New Mexico since they first set up camp in February near what’s called the "Anapra Gap" — an area where the border wall stops.

We caught up with the group at their camp in early April.

Jim Benvie: "If you literally step your foot over that little concrete barrier there, you're in Mexico. This is Anapra, Mexico, right here. This is Sunland Park, New Mexico. So as you can see, it's very simple for anybody who wants to get through this border, to simply walk across this border. They don't need to dig a hole, they don't need to dig a tunnel. They can just come right on in."

The group, formerly known as the United Constitutional Patriots, claims it has helped Border Patrol detain more than 6,000 migrants — a number Border Patrol says they can't confirm. Law enforcement didn't ask them to be here. In fact, CBP doesn't condone their presence — but they haven't exactly stopped them either.

Meanwhile, New Mexico's governor, among other state officials, has sounded the alarm about the group's armed tactics and the potential harm. The ACLU also released a statement calling the group vigilantes who are essentially kidnapping migrants at gunpoint.

They might be concerned for a few different reasons: The group's "commander" was arrested on felony weapons charges, they were booted from their camp because they were trespassing and, according to a police report, one volunteer was asked to leave after suggesting that the group shoot and gas migrants crossing the border.

But none of those incidents specifically dealt with how the group has been stopping migrants for months, sometimes in the dead of night, while carrying rifles. And what's still unclear is whether the group's actions are totally legal.

Ramiro Cordero: "I see it kind of like, you know, a neighborhood watch, you know? We all have the right as citizens to stand there and report criminal activity to the authorities."

Christian Bryant: "So, at what point would it would it become a problem, just out of curiosity?"

Ramiro Cordero: "The moment that they put a hand on somebody and arrest, that's a violation of anybody's civil rights because they don't have the right to do so."

Maryam Ahranjani: "Yeah, I mean, it sounds pretty clear someone's advising them on what they should and shouldn't do."

Maryam Ahranjani is a criminal law professor at the University of New Mexico. She says the law here is murky, but there could be grounds for other offenses — even if the migrants aren't being physically touched.

Christian Bryant: "Is what they're doing legal?"

Maryam Ahranjani: "So, I think that there are a number of potential charges here under state law. As I mentioned, false imprisonment. … New Mexico law defines false imprisonment as intentionally confining or restraining another person without his consent and with knowledge that he has no lawful authority to do so. ... Kidnapping, which is a more serious charge, is another potential charge. And that requires the unlawful taking, restraining, transporting or confining of a person by force, intimidation or deception."

But there's no outside oversight to make such a determination, and the videos filmed by the group don't show everything, like how they make first contact with people crossing illegally. There is another possibility for authorities to investigate the group — but it's less likely. And that's if a complaint is made by a migrant — the voice we haven't heard in all of this.

That could be one reason why at least one civil rights group is trying to amplify migrant voices. The ACLU told Newsy that it's currently looking for migrants who have been stopped by the group to pressure local authorities to investigate them.

It's difficult to say whether what the Guardian Patriots are doing is totally legal or illegal. And it should be noted that they've been doing this since February without any incident about how they do it.

But no matter where you stand on the issue of civilian border patrols, Ahranjani says that the law can be changed.

Maryam Ahranjani: "If we don't like what we see in terms of the options for offenses or defenses or punishments, we could change those laws by letting our legislators know and asking them to change the law. ... We should play a role in deciding the system."