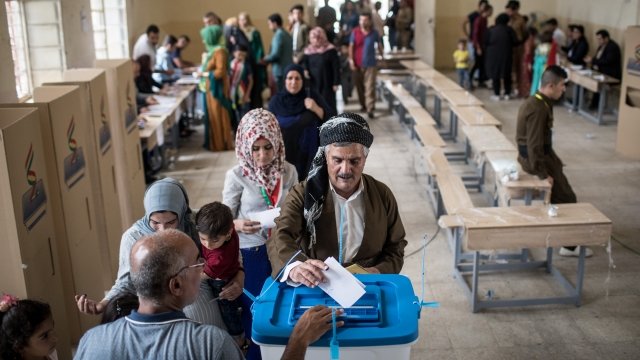 By Katie Cammarata
September 30, 2018
The vote comes about a year after the region's independence referendum, which was shut down quickly by Iraq.
SHOW TRANSCRIPT

There were 111 seats up for grabs, with 11 saved for minorities.

The parliamentary vote comes a year after the region's independence referendum, which was shut down quickly by Iraq.

Multiple outlets speculate the current ruling coalition will continue sharing power there, though there could be a slight power shift.

Reported splits in the Patriotic Union of Kurdistan party could lead to the Kurdistan Democratic Party picking up more parliamentary seats. The two parties have been sharing power for nearly three decades.

Of the nearly 4 million registered voters, major parties reportedly expect only about 40 percent to cast ballots.