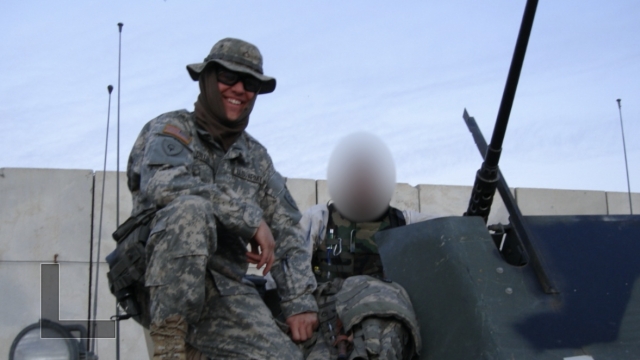 Wolf doesn’t drive to work the same way more than once a day.

“I use different roads. I always look in my rearview mirrors. I’m careful when I leave, who I take with me and who to let know where I’m going,” he says.

Wolf is an Iraqi interpreter who asked to go by his nickname from the early 2000s, when he spent three years working for the U.S. military. He asked Newsy to conceal his real name because, to this day, he fears being identified, tracked down and killed.

“They consider us traitors,” he explained.

Because of their work for the U.S., local militias have long targeted interpreters like Wolf.

“My first threat, they came to my family's house.” he said. “They told them, ‘We know where he actually works. And we will shoot him on the spot if he doesn't quit.’”

The U.S. military made people like Wolf a promise: If they put their lives on the line to help American troops, they’d get special help to immigrate to safety in the U.S.

But that promise has largely been broken.

“Their wait time is not months or years. If you're an Iraqi who applies to this program today, your wait time is really in centuries,” Adam Bates, policy counsel at International Refugee Assistance Project, told Newsy.

Iraqi translators are given special treatment among U.S. refugees under the Direct Access Program. Last year, the administration even went a step further, setting aside 4,000 refugee spots specifically for people like Wolf.

“Across Congress, across the administration, across the Pentagon, everybody says they support this program,” Bates said. “But there's been a real failure to translate that ostensible support into action.”

It’s part of a broader trend under President Trump. The U.S. has admitted just over 10,000 refugees in the past year, the lowest number since the refugee act of 1980.

In a statement to Newsy, the State Department maintains that the refugee program “is a vital lifeline for the world’s most vulnerable refugees who have no other alternative.”

But they also said the pandemic has created logistical challenges to international travel and overseas refugee interviews.

“They didn't even waste a bullet,” he said. “They ran him over with a car. He stayed six days in the hospital, in a coma and internal bleeding in his head.”

Wolf knows his path to the U.S. is uncertain.

Reuters reports that the Trump administration is considering postponing all refugee admissions this coming year.

“Don’t be sorry for me,” Wolf said. “Be sorry for everyone, actually, who has gone through the same pattern of suffering. I cannot sleep without a gun nearby in my head or under the pillow — until now.”

The administration hasn't yet consulted with Congress on the refugee admissions ceiling for fiscal year 2021, which begins on October 1. The final decision will be President Trump’s.

Advocates say that no matter which candidate wins in November, the infrastructure of the refugee program will take time to rebuild, including things like the administration’s processing capacity and resettlement services here in the U.S.

And some worry this coming year’s admissions will set another record low, leaving people like Wolf with nothing to do but wait.

“We made the right choices, we paid our dues, we lost loved ones. They will not come back ever,” Wolf said. “I think we deserve a chance.”