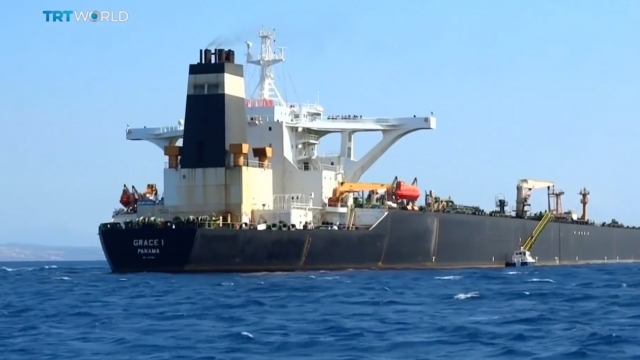 SMS
Iranian Oil Tanker Changes Course After Greece Refuses To Get Involved
By LeeAnne Lowry
By LeeAnne Lowry
August 24, 2019
The Adrian Darya 1 — formerly known as the Grace 1 — says it is now headed to Turkey.
SHOW TRANSCRIPT

An Iranian oil tanker that was granted release from Gibraltar over a week ago has changed course, raising international concern about where it's heading.

British authorities seized the tanker near Gibraltar last month on suspicion it was carrying Iranian crude oil to Syria, which is a violation of EU sanctions against the Syrian government. According to Reuters, the tanker was released because Gibraltar was "satisfied that the oil tanker is no longer heading for Syria."

The tanker set off for Greece Aug. 19. The U.S. pressured Greece not to help the ship. The U.S. had unsuccessfully requested Gibraltar not release the vessel. It also issued a warrant to seize it, based on allegations that the Islamic Revolutionary Guard Corps schemed "to unlawfully access the U.S. financial system to support illicit shipments" from Iran to Syria.

On Wednesday, Greece said it wouldn't accept the tanker, noting that no Greek ports have the infrastructure to offload its oil. Now the ship has updated its final destination to a port in Turkey that's only 125 miles away from the Syrian refinery authorities accused it of heading to in the first place. According to The Associated Press, sailors can report any destination whether or not the tanker actually intends to go there.