Iran Warns US: Stay In The Nuclear Deal Or 'Face Severe Consequences' 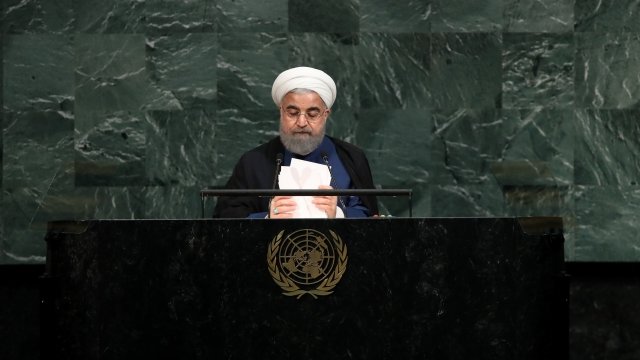 SMS
Iran Warns US: Stay In The Nuclear Deal Or 'Face Severe Consequences'
By Katherine Biek
By Katherine Biek
April 24, 2018
Iran's president said his government will "react firmly" if the U.S. does not "live up to [its] commitments" under the agreement.
SHOW TRANSCRIPT

Iranian President Hassan Rouhani warned the Trump administration on Tuesday to remain in the 2015 nuclear deal or "face severe consequences."

In a televised speech, Rouhani said the "Iranian government will react firmly" if the U.S. does not "live up to [its] commitments" under the agreement.

The declaration comes as the May 12 deadline approaches for President Donald Trump to make a decision on whether to reimpose economic sanctions on Iran.

Trump says the current restrictions aren't tough enough on Iran's ballistic missiles development and expansionist activities in the region. Those issues weren't part of the original agreement, and all six other countries have rejected the changes. But Trump's said he'll pull out of the deal if it isn't "fixed."

He's expected to discuss the Iran deal with French President Emmanuel Macron on Tuesday. German Chancellor Angela Merkel is also expected to urge Trump to stay in the deal when she visits the White House on Friday.