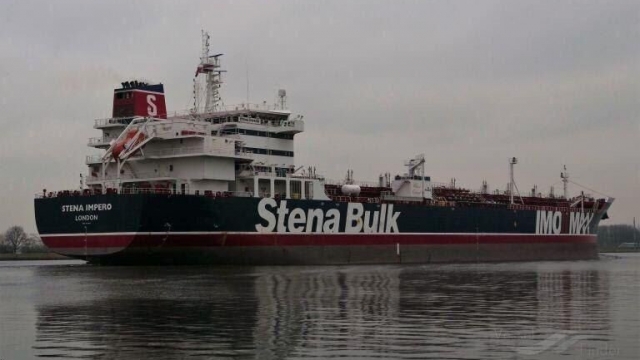 Tensions are running high a day after Iran seized a British oil tanker in the Straight of Hormuz. And reportedly, it's all because of a misused exit lane.

Iran's Islamic Revolutionary Guard Corps first reported it had captured a British-flagged vessel. The guard said in a statement that the tanker, named Stena Impero, was confiscated "at the request of Hormozgan Ports and Maritime Organization ... for failing to respect international maritime rules."

Iran's state run news agency says the tanker was using an exit lane to enter the Strait of Hormuz and almost collided with other vessels as a result.

Iran's foreign minister repeated that claim on Twitter, saying "Iran guarantees the security of the Persian Gulf and the Strait of Hormuz." He said the seizure was meant to uphold maritime law.

British Foreign Secretary Jeremy Hunt said he doesn't think British citizens were aboard the ship when it was captured. And the UK has told its ships not to pass through the strait for now.

Other countries have gotten involved too. Since the incident, the U.S. has issued a maritime alert for the Strait of Hormuz. France and Germany have condemned the seizure and called for de-escalation.