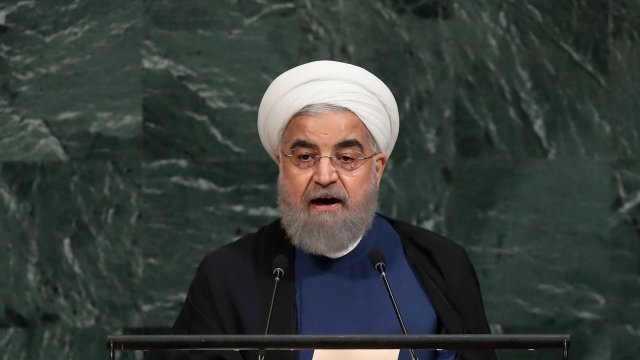 SMS
Iran Says It's Willing To Talk With US 'Right Now' Amid Sanctions
By Gabrielle Ware
By Gabrielle Ware
August 6, 2018
Sanctions that were relaxed under the 2015 nuclear deal are set to go back into effect early Tuesday.
SHOW TRANSCRIPT

His statement comes as U.S. sanctions on the country are set to take effect Tuesday. They were previously relaxed under the 2015 Iran nuclear deal.

Rouhani said Monday, "I don't have preconditions. If the U.S. government is willing, let's start right now." He also said talks won't "make sense" once Iran is under sanctions.

White House Security Adviser John Bolton told CNN Monday, "If the Iranians are really willing to come and talk about all of their malign behavior in the region and around the world, I think they'd find the President willing to do it."

But Rouhani said, "The person who is claiming to be willing to negotiate today has withdrawn from all international commitments, from [the] Paris Agreement (on climate change) to its business commitments with other countries."

Both countries have expressed willingness to sit down with the other in the past, but each have doubted the others sincerity.