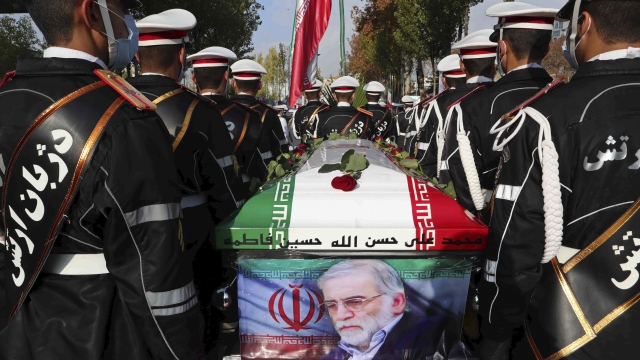 Experts say that could put the U.S. and allies at risk.

Iran blames Israel for the Friday ambush, saying it used “electronic devices” to remotely kill the scientist — who has long been considered the father of the country’s covert nuclear weapons program. Initial reports in state media claimed Fakhrizadeh was fatally shot after a truck explosion.

"Whoever carried it out probably either had or thought they had a green light from Washington," Warrick, now a senior fellow at the Atlantic Council, says. "If anybody had sought permission from a Biden administration, it almost certainly would never have happened."

Neither Jerusalem nor Washington has publicly responded. But the assassination could complicate President-elect Joe Biden’s goal of rejoining the nuclear agreement with Iran, which President Donald Trump exited in 2018.

A former adviser to Israeli leaders tells Newsy the attack might have been carried out for that very reason.

"The prime minister has been dead against the whole deal, going back to the old deal, which he considers to be a historic error," says Chuck Freilich, former deputy national security adviser to Israeli Prime Ministers Ehud Barak, Ariel Sharon, and Ehud Olmert. "He considers the deal in the end, an existential threat to Israel."

The country lost another prized Iranian earlier this year, after a U.S. airstrike killed top general Qassem Soleimani in January. Monday’s funeral comes as Biden receives his first President’s Daily Brief, where intelligence on Iran is sure to be high on the list.

"Trump did succeed in generating significant leverage over Iran. To squander that completely would be a shame."